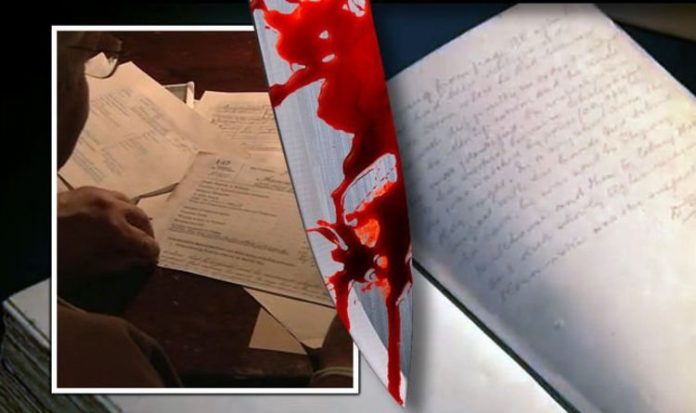 The notorious serial killer preyed on female sex workers in Whitechapel during the late 19th Century before his crimes suddenly stopped. Historians still debate the identity of the brutal murderer and whether he killed more than five victims. In recent years, a book previously held in New Scotland Yard revealed the name of a man who police believed was responsible for the deaths. The individual, Aaron Kosminski, was detailed in a secret note in the final pages of a memoir – but experts believe they have proof that shows he was not the killer.

The suspect was named in a handwritten piece in the final pages of The Lighter Side Of My Official Life, published by chief Ripper investigator Sir Robert Anderson in 1910.

The note detailed Mr Kosminski, a mentally ill Jewish immigrant, as the man investigators thought was responsible for the gruesome killings.

The London psychiatric hospital, which has since closed, gave an insight into the wellbeing of the suspect – which could rule out Mr Kosminski.

Prof Peckitt said: “The admitting medical officer says that he was guided and his movements were altogether controlled and that he knew the destiny of all mankind.

“Now these are really quite typical phrases or statements used by people with paranoid schizophrenia.”

Prof Peckitt revealed his theory about why the individual could not be the killer on the 2010 TV show Mystery Files.

He said: “I think Kosminski was an ill man and I think that his disorder would have robbed him of much of the ability to plan and carry out a sequence of events like this.

“I don’t think that Aaron Kosminski was Jack the Ripper.”

Police never charged the suspect and while criminal profiler Pat Brown said he did fit the bill, she did not believe he was the killer.

She suspected the real Jack the Ripper was Jewish due to a note discovered on a wall next to a piece of apron stained with the blood of victim Catherine Eddowes.

The writing, which was cleaned away by police out of fear that it could incite antisemetic feeling, read: “The Jews are the men that will not be blamed for nothing.”

Ms Brown said: “The Stride incident was outside a particular club that had a Jewish rally that night, now Jack took this to heart.

“If he was there he might still have that in his head, so he still has that rage he wants to tell society about.

“And he thinks, ‘Everybody blames me for everything. They’re blaming me for nothing’. And so he goes to write on the wall.”

Mystery Files first aired in 2010 and is available to watch on Amazon Prime.