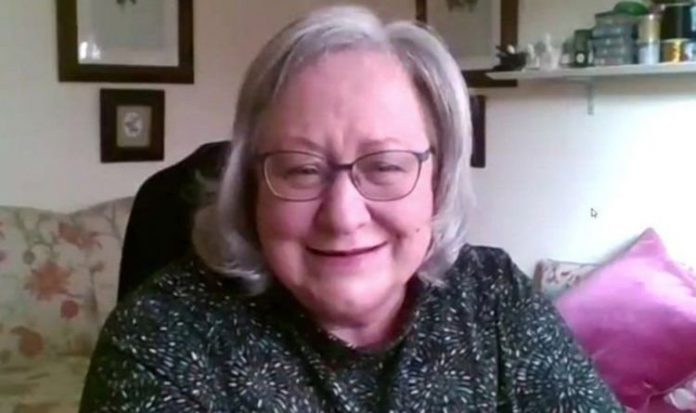 Jackie Weaver became a worldwide name after footage of a chaotic Handforth Parish Council meeting recorded millions of views overnight. The meeting, which took place on 10 December, descended into chaos when Ms Weaver kicked parish chairman Brian Tolver out of the virtual meeting, for being “disruptive”. However, Ms Weaver has now spoken out about the incident and admitted to the BBC that she did not have the authority to take such an action in the contentious virtual meeting.

In a moment that quickly went viral, Mr Tolver labelled himself as the “clerk” of the meeting, prompting Ms Weaver to respond: “The chairman simply declared himself clerk and notified everybody of the case.

“There is no way of stopping him from calling himself clerk. Please refer to me as Britney Spears from now on.”

Mr Tolver, who refused to recognise the legitimacy of the meeting, was removed from the meeting after shouting: “You have no authority here Jackie Weaver!”

Councillor Aled Brewerton said as vice-chairman he should take charge of the meeting and shouted: “Read the standing orders – read them and understand them!”

JUST IN: Remainers’ humiliated as row to stay in EU ‘wasn’t about Brussels’

Mr Brewerton then yells off-camera: “We’re trying to have a Teams meeting, you fool!”

He was also booted out of the heated Zoom meeting and placed in a virtual waiting room alongside Mr Tolver.

Speaking to BBC Radio 4’s Woman’s Hour this morning, Ms Weaver admitted she wasn’t “actually sure” who was meant to be in charge of the meeting.

The chief officer of the Cheshire Association of Local Councils said she was called in to help and “support” parish councillors to hold the meeting rather than “train” them.

Ms Weaver said: “Of that meeting, I’m not actually sure who was in charge.

“I’m not a councillor nor am I member of the parish council.

“99.99 percent of council meetings are just not like that, they are often less exciting than we might hope they were.”

Ms Weaver told the BBC that it was a “bit harsh” to make fun of someone who had “lost it”.

She explained: “Although clearly there is amusement in the fact somebody has lost it.

“It’s harsh to take some pleasure from that but if you can see the other person has lost it there is a sense of I did ok there, holding it together.”

Video of the meeting has since recorded more than three million views and saw Jackie Weaver’s name trending on Twitter worldwide.

Council chairman Mr Tolver doubled down today, telling reporters that he had no regrets about his behaviour and said Ms Weaver “had no status to speak other than when invited”.

He said: “If you look at the first meeting you will see I have reason to be angry.”