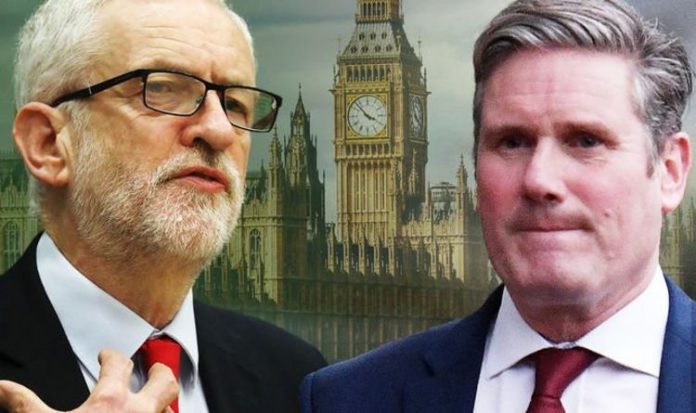 Mr Corbyn’s apology for his comments on antisemitism in the Labour Party are yet to be “forthcoming”, a political expert has told Express.co.uk. It comes as the former leader was reinstated to the party by the National Executive Committee (NEC). Sir Keir, however, today decided not to restore the whip to Mr Corbyn, a move which will strip him of his place in the party’s Parliamentary body.

This will appease a number of groups, such as the Board of Deputies of British Jews, that had overnight pressured Sir Keir.

It took just 19 days for Mr Corbyn’s case to be heard, contrasting incredibly with Ken Livingstone who was suspended from the party for almost two years before his antisemitism case was resolved.

Mr Corbyn’s suspension came after he said a report into antisemitism in the party under his leadership was “overstated”.

He has since issued a statement saying he regretted any “pain” caused by his comments.

Labour news: Starmer is under pressure from both factions of the party over Corbyn’s reinstatement (Image: GETTY)

And while many on the Left will be happy that Mr Corbyn has been reinstated, socialist and union top brass, including the likes of Laura Pidcock who was recently elected to the NEC, and Unite the Union General Secretary Len McCluskey, will be furious with Sir Keir’s decision.

A civil war could be on the brink, with the Labour leader at risk of severe backlash from the party’s Left, Tim Bale, Professor of Politics at Queen Mary University told Express.co.uk.

He explained: “This was always going to be a risk: the decision wasn’t up to Starmer, nor has it been made by an independent body.

“The NEC sub-committee have readmitted Jeremy Corbyn with a formal warning but without insisting on an apology.

JUST IN: Keir Starmer is ‘TRAPPED’ by ‘political grenade’ of Corbyn whip

Jeremy Corbyn: The former leader pictured on the day of his suspension in October (Image: GETTY)

“But whatever happens, it’s not a good look.”

In making his decision, Sir Keir said in a statement: “Jeremy Corbyn’s actions in response to the EHRC report undermined and set back our work in restoring trust and confidence in the Labour Party’s ability to tackle antisemitism.

“In those circumstances, I have taken the decision not to restore the whip to Jeremy Corbyn.

“I will keep this situation under review.

Jewish Labour: Many Jewish groups within Labour are said to be furious at the decision (Image: GETTY)

Len McCluskey: Corbyn’s supporters were delighted that he was reinstated (Image: GETTY)

“The disciplinary process does not have the confidence of the Jewish community. That became clear once again yesterday.

“It is the task of my leadership to fix what I have inherited.

“That is what I am resolute in doing and I have asked for an independent process to be established as soon as possible.”

Sir Keir would have made the decision alongside the party’s Chief whip, Nick Brown.

A spokesman for the Jewish Labour Movement, a group which has been particularly critical of Mr Corbyn, said: “After his failure of leadership to tackle antisemitism, so clearly set out in the EHRC’s report, any reasonable and fair-minded observer would see Jeremy Corbyn’s statement today as insincere and wholly inadequate.

General election: It is nearly one year since Labour suffered its worst election since 1935 (Image: Express Newspapers)

“Jeremy Corbyn is not the victim of Labour antisemitism – Jewish members are.”

Questions will now be raised of the NEC’s swift decision to allow Mr Corbyn back into the party.

The meeting to discuss the reinstatement is said to have taken just four hours.

Mr Corbyn issued his statement, which stopped short of an apology, not long before the NEC meeting yesterday.

Sir Keir’s mind was perhaps already made up, as he responded to the NEC’s decision in a tweet on Tuesday evening, saying it had been a “painful day for the Jewish community and those Labour members who have fought so hard to tackle antisemitism”.

He added: “Jeremy Corbyn’s statement in response to the EHRC report was wrong and completely distracted from a report that identified unlawful conduct in our tackling of racism within the Labour Party. This should shame us all.”

The Equality and Human Rights Commission (EHRC) report found that under Mr Corbyn’s leadership, Labour had been responsible for “unlawful” harassment and discrimination.

Mr Corbyn responded by saying the “scale of the problem was also dramatically overstated for political reasons by our opponents inside and outside the party, as well as by much of the media”.

The human rights watchdog also suggested that an independent complaints process should be set up in Labour to deal with such cases.

It is this point that has left many of the former leader’s critics up in arms.

They say his case should not have been heard until such an independent panel was established, in order to investigate Mr Corbyn without any political loyalties or bias in the process.