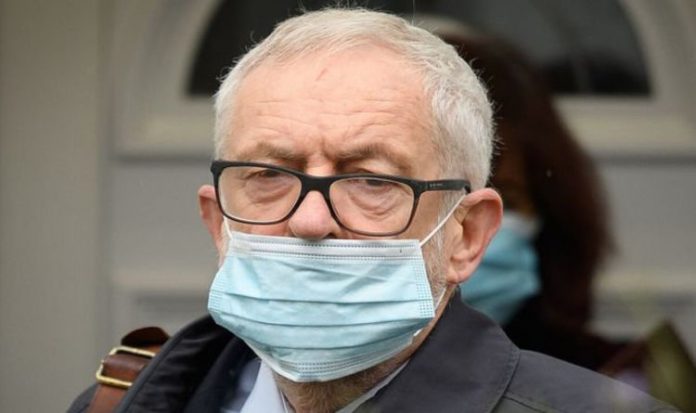 The former Labour leader was suspended from the party membership and had the Labour whip withdrawn following his response to a damning anti-Semitism report. The Equality and Human Rights Commission (EHRC) found Labour broke equality law during the tenure of the left-wing leader. The 71-year-old was suspended on October 29, pending an investigation, after he said the scale of Labour anti-Semitism had been “dramatically overstated for political reasons”.

But more than 72-hours after action was taken against him by the party, Mr Corbyn has still referred to himself as a Labour MP.

On his Twitter biography to his 2.4 million followers, Mr Corbyn describes himself a Labour MP for Islington North.

This has since prompted a huge backlash on the platform from a number of disgruntled people.

One user wrote: “@JeremyCorbyn I see you are still calling yourself a Labour MP, You are no longer a Labour MP.

“Please amend your bio so it accurately reflects that you aren’t a Labour MP anymore.”

Replying to a post by Mr Corbyn, another user said: “Doesn’t your bio need to be updated? You’re no longer a Labour MP are you?”

Meanwhile a third added: “You are not a Labour MP.”

The EHRC report released last Thursday, concluded the party was responsible for unlawful acts of harassment and discrimination and found evidence of “political interference” in the complaints process by Mr Corbyn’s office.

The former leader has said he will “strongly contest” the decision to suspend him and described it as a “political intervention”.

Mr Corbyn said: “I will strongly contest the political intervention to suspend me.

“I’ve made absolutely clear those who deny there has been an anti-Semitism problem in the Labour Party are wrong.”

A number of Labour MPs have since spoken out against decision to suspend Mr Corbyn and called for him to be reinstated.

He said: “I was very clear in my response to the commission report on Thursday, which found that the Labour Party had acted unlawfully and there’d been a failure of leadership, that we needed to accept the findings, accept the recommendations and implement them and apologise.

“But I also went on to say that under my leadership we will root out anti-Semitism and that those that deny or minimise anti-Semitism in the Labour Party and say it’s just exaggerated or part of a factional fight are part of the problem.

“I was therefore very disappointed in Jeremy’s response where he appeared to suggest it was exaggerated etc, and I’d invite Jeremy just to reflect on what he said on Thursday and think about what he said.

“Because I think for most people what they wanted from the Labour Party on Thursday was an honest recognition of the problem and an apology, a line in the sand and a constructive way to move forward, which is what I want for the Labour Party.”

READ  Argentina and the UK Joint Webinar: COVID-19 vaccines in Latin America and the Caribbean