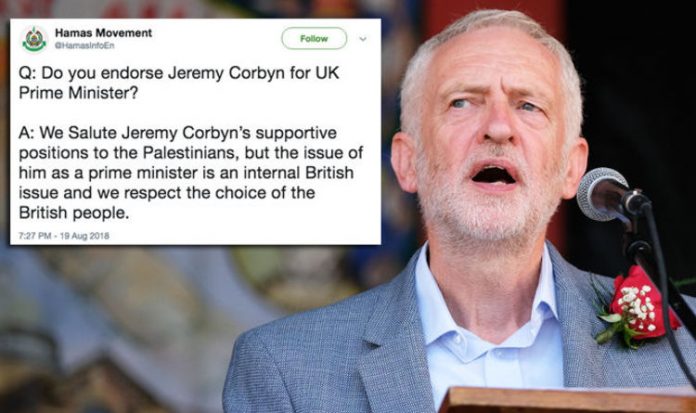 The radical organisation hailed the Labour leader’s “supportive positions to the Palestinians” in a social media post.

But it stopped short of endorsing Mr Corbyn for Prime Minister, saying the decision is down to British voters.

“But the issue of him as a prime minister is an internal British issue and we respect the choice of the British people.”

Mr Corbyn has come under increasing pressure over issues linked to anti-Semitism and the Israeli-Palestinian conflict.

Earlier this month Mr Corbyn became embroiled in a terror row after he was photographed laying a wreath at a cemetery in Tunisia in 2014.

And his handling of the ongoing anti-Semitism scandal came under further scrutiny during a visit to Scotland yesterday.

The hard-left leader insisted that Labour “does not tolerate anti-Semitism in any form” as he travelled north of the border.

Mr Corbyn was also pressed over allegations he had dinner with Hamas chief Khaled Mashal in Gaza in 2010.

The Islington North MP was said to have described such a meeting in a column for the Morning Star newspaper.

Gordon Brown last week said Mr Corbyn “has got to change” to address concerns over bigotry in the party.

And he attacked Labour’s failure to adopt the International Holocaust Remembrance Alliance’s (IHRA) definition of anti-Semitism.

The ex-Prime Minister the issue had to be dealt with immediately because it was “simply wrong”.

Asked if he thought Mr Corbyn was fit to lead the country, Mr Brown said: “Jeremy Corbyn has got to change.

“He cannot sustain particularly what he is saying about the international agreement on what we do in our attitudes to both the Holocaust and to Israel.

“I predict to you that’s going to change within a few weeks. I believe that it will change but even that will not be enough.

“You have got to show by your actions not simply by saying some words that you understand the deep hurt that has been caused.”