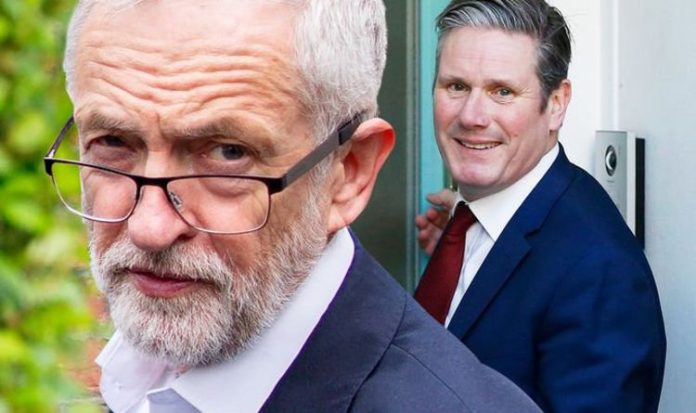 Sir Keir, the Labour Party’s new leader, is attempting to cast-out the radical mould the party took on under former leader Mr Corbyn. The veteran socialist politician committed the party under his leadership to a left-wing cause, but was rejected by Britons the country round in the 2019 general election. Sir Keir is now moving slowly to reestablish the party as a moderate opposition power, retaining many of the 2019 manifesto pledges, but appealing to a wider voter base.

He has already faced resistance.

Len McCluskey, General Secretary of Unite the Union, earlier this month pulled the plug on 10 percent of Labour’s funding – some £150,000 in donations – while radical grassroots groups have already called for a vote of no confidence in Sir Keir.

The leader’s efforts may further prove difficult as remnants of Mr Corbyn’s socialist legacy remain, such as his community campaign and organisers unit.

Although intended to give Labour a voice in local areas around the country, Steven Fielding, Professor of Political History at the University of Nottingham, told Express.co.uk that the organisers were nothing more than “Corbynite agents” looking to keep checks on the party.

When talking about the threat grassroots groups pose to Sir Keir, he admitted: “I think it’s exaggerated.”

However, he added: “There were things like community organisers who were put into the party.

“But many people realised that they weren’t really organising the community or anything outside the party, they were basically agents, Corbynite agents, to help mobilise the left in the party and get candidates in.”

Mr Corbyn drew up the community organiser outfit in 2018 in what he said would “empower people” and “further invigorate” Labour.

Many political observers say Sir Keir will wait until at least mid-way through next year before he begins announcing policy revamps.

Despite a clear desire to bring the party to the centre ground, Sir Keir has indicated that he plans to keep much of Mr Corbyn’s policies in place.

He has already committed to higher taxes on the wealthiest earners, the scrapping of tuition fees, the “common ownership” of rail, mail, energy and water, and ending NHS outsourcing.

For Sir Keir, the upcoming National Executive Committee election results will be vital for the path he intends to take.

New constituency seats are in the offing, as well as several other newly-established seats.

Those who support Sir Keir are widely regarded as certain of being elected.

However, some of Mr Corbyn’s allies, like Laura Pidcock, could get elected.

Sir Keir also had to deal with the Equality and Human Rights Commission.

He is expected to accept the Commission’s conclusions, which would seek to put to bed allegations over antisemitism once and for all.