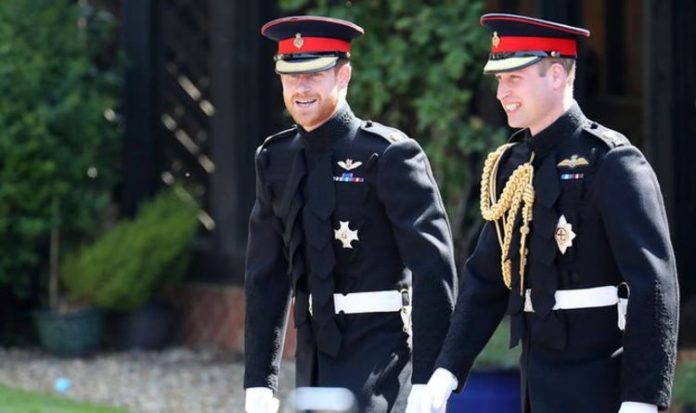 The Duke of Sussex had to leave his position as Captain General when he stepped down from royal duties earlier this year. But Robert Lacey, author of ‘Brothers At Arms’, has said Prince William taking over the role would spell the end of the brothers relationship. It comes after previous accounts revealed Prince Harry’s heartbreak at stepping back from the military, and accounts saying he was “devastated” when he learned he would no longer be allowed to wear his uniforms.

Mr Lacey told Newsweek Harry’s former role as Captain General of the Royal Marines is being held in abeyance until March next year.

Speculation has begun about Prince William potentially taking over from Prince Harry in the role, but the author warned that would spell the end of their relationship.

He said: “The Royal Marines position is in abeyance until the end of the review period.

“There have been stories that it’s going to be assigned to William. Were that to be the case, that would be the end of it.”

Omid Scobie and Carolyn Durand, authors of ‘Finding Freedom’, claimed Prince Harry was “emotional and demoralised” after losing his military titles when stepping back from the royal family.

The book said: “If his grandmother’s validation of his experiences served as encouragement, the most demoralising aspect of the new deal was his being stripped of his honorary military appointments that had been awarded to him as a senior royal.

“As a retired serviceman, Harry would always be able to wear his medals, but no longer could he wear uniform as Captain General of the Royal Marines, Honorary Air Force Commandant of the Royal Air Force Bas Honington, and honorary Commodore-in-Chief of the Royal Navy’s Small Ships and Diving Operations. These roles had come to an end.”

A source close to Prince Harry added to the authors: “That’s been a tough pill to swallow, and the one that has been most painful to Meghan witness him go through.”

It comes as General Sir Richard Dannatt wrote a heartfelt letter to Harry urging him not to “stay away for too long”.

The General told Sunday People he and the veterans and charities the Prince supported “miss him”, but admitted he cannot see Harry returning to the UK for his traditional duties.

He said: “Harry and Meghan are very much involved in other things and that’s their life choice and I don’t criticise them for that.

“But it means that he is not as available, not supporting in such a high-profile fashion, the work of charities and the needs of veterans.

“I don’t criticise him for that, he makes his own choices, but we miss him and I hope that in a change of circumstances, that I can’t envisage, he returns to take up more traditional royal duties in this country.”

In 2013, the Prince was reported to have said: My father’s always trying to remind me about who I am and stuff like that.

“‘But it’s very easy to forget about who I am when I’m in the Army.”

Mr Scobie and Ms Durand added in ‘Finding Freedom’: “Never a fan of the stuffier side of royal duties, Harry, better known as Captain Wales, was at home in the no-frills, hands-on world of a soldier.”