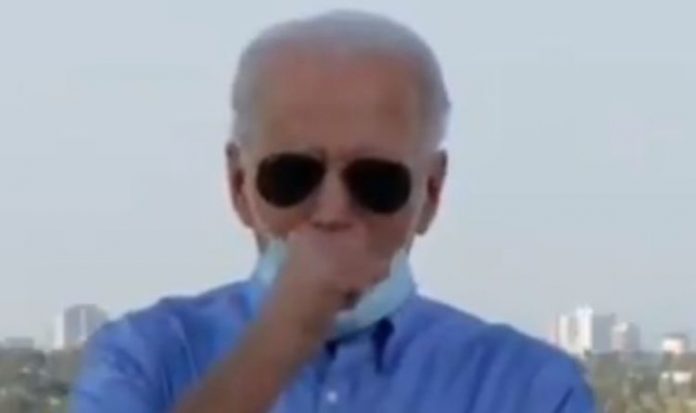 The former Vice President was campaigning in the swing state of Nevada when he pulled down his mask, coughed and then pulled it back up on his nose. GOP Rapid Response Director Steve Guest tweeted: “You can’t make this up. Joe Biden just removed his mask to cough in his hand. Talk about unsanitary!”

Author and chair of Trump Students Charlie Kirk added: “Is this what “following the science” looks like?”

With just over three weeks to go until election day, both campaigns have entered the final stages.

President Trump has made his first public appearance since returning to the White House after spending time in hospital being treated for the virus.

The White House refused to declare he was no longer contagious and a gathering of hundreds of people on the South Lawn went ahead despite the guidance of public health officials.

The president, who did not wear a mask while making his speech, received an enthusiastic response from his supporters.

The second presidential debate between Trump and Biden has been officially cancelled.

Mr Trump had expressed reservations about holding the debate “virtually”.

However, the nonpartisan Commission on Presidential Debates would not back down on its decision not to have candidates on stage together, citing an abundance of caution for health concerns.

Mr Biden has been consistently polling ahead of Mr Trump since the start of the year, and hovered at around 50 percent in recent months.

On occasions, he has boasted a 10-point lead.

However, he has come under fire for backing Wall Street and corporate interests, amid the Democrat’s record-breaking fundraising before the US election.