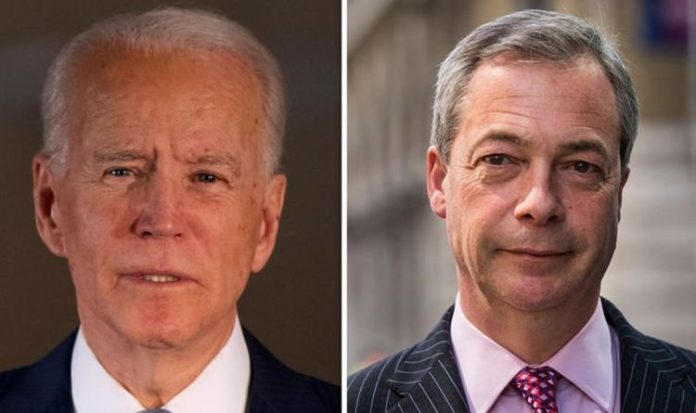 Mr Farage, a long-standing friend of the US President, described Mr Trump as the “most Pro-British President for many years” and warned of the consequences if Democrat candidate Joe Biden wins.

The UK does not stand any prospect of securing a trade deal with the US if Biden is in the White House, he warned.

“The special relationship is vital for post-Brexit Britain and will only be safe in Trump’s hands,” he said.

Mr Farage, writing for the Sunday Express, claimed that Mr Biden “sees Brexit as a mistake” and stirred memories of Barack Obama’s notorious intervention in the run-up to the referendum.

In April 2016, then-President Obama warned that Britain would be at the “back of the queue” when it came to trade deals if it left the EU.

Mr Farage said: “Whether you like Trump’s style or not, one thing is for certain; that this is the most Pro-British President for many years. By contrast, Joe Biden was Obama’s deputy when he said Britain would be back of the queue if we dared to vote for Brexit.

“He is keener on the relationship with Ireland than he is with us, sees Brexit as a mistake and I do not see any prospect of a free trade deal with the USA under President Joe Biden. The special relationship is vital for post-Brexit Britain and will only be safe in Trump’s hands.”

Ex-MEP Mr Farage saluted Mr Trump’s foreign policy record, saying: “Under Trump there have been no more endless wars and a remarkable series of agreements are now being signed between Israel and a number of Arab states. In 2016, Trump stood up and made the people a series of promises and, in the main, has kept them.

READ MORE: ‘Britain needs a Trump win to get big post-Brexit trade deal with US’

The candidates may not face each other until the final debate on October 22.

An aggregate of polls put Mr Biden on 52.1 percent and Mr Trump on 41.9 percent. However, as Mr Trump demonstrated in 2016 and George Bush in 2000, under the US electoral college system it is possible to lose the popular vote but still be elected president.

Mr Farage suggested commentators who have written off Mr Trump could be in for a surprise.

He said: “Back in 2016, I stuck my neck out and not only backed the Trump campaign but also predicted he would win. This was treated by much hilarity at the time from the great and the good.

“I think that those same people are all in for another shock on November 3.” 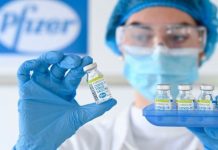 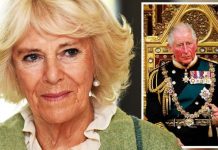