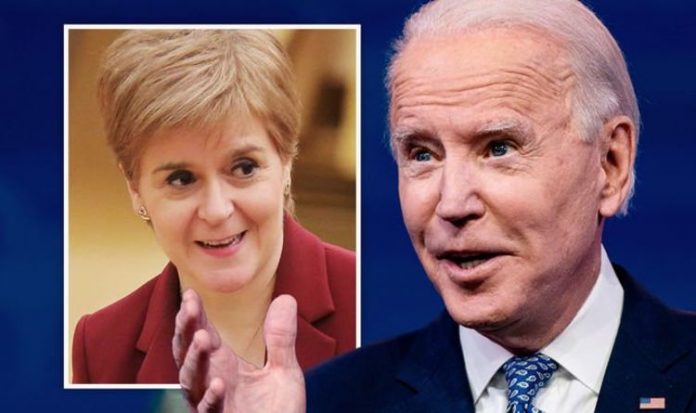 Democrat Joe Biden is within days from moving into the Oval Office and Prime Minister Boris Johnson is going to want to strengthen the special relationship with the former Vice President as soon as possible. Mr Johnson has put a trade agreement with the US at the heart of his plans to revive post-Brexit Britain but whether this will be realistic with Mr Biden in the White House is a different question. In September, Mr Biden wrote on Twitter: “Any trade deal between the US and UK must be contingent upon respect for the [Good Friday] Agreement and preventing the return of a hard border. Period.”

It was the first in a series of discouraging comments linking potential effects of Brexit to a future trade deal.

But while his presidency might be problematic for Mr Johnson, Scottish First Minister Nicola Sturgeon could actually benefit from the Democrat’s four-year term.

Ms Sturgeon is determined to hold another Scottish independence referendum in the Spring of 2021 and, according to Ronald MacDonald, research professor of macroeconomics and international finance at Glasgow University’s Adam Smith Business School, she might receive the backing of Mr Biden.

“He will have to respect the democratic wishes of the Scottish people.”

He noted: “If we are talking about a situation pre-referendum, I am not sure.

“Because clearly, there would be wider implications for the United Nations (UN), for example.

“So he could say he would prefer Scotland to remain in the UK.

“But I cannot see him not respecting the democratic will of the people afterwards.”

JUST IN: Brexit fury as EU judges’ orders will be enforceable in UK

The sentiment was echoed by Chris Carman, a Professor of Politics at the University of Glasgow, who argued Mr Biden’s presidency would likely mean a smoother ride for an independent Scotland.

He told The Scotsman before the US election: “From an independence point of view, to some extent a Biden presidency might be slightly more attractive.

“I would imagine that Biden would reflect what [former US president Barack] Obama said during the referendum, which is generally speaking stability is preferred, but it is clear that it was a matter for the people of Scotland.

“It is a more diplomatic response and I can imagine in the event of independence, a Biden administration would take a much more neutral view and we will start to establish a trading relationship with Scotland.”

Mr Biden has not commented on Scottish independence since 2014.

The then-Vice President was campaigning in Iowa when a reporter asked him about the forthcoming independence referendum that year.

Mr Biden said: “I learned from Scottish friends, the last thing to do is to suggest to a Scot what he should do.

“So I’m going to stay out of that. We have a great alliance now.”

His noncommittal comments came the same day former US President Barack Obama strongly indicated he would prefer Scotland to stay in the UK.

More voters than ever appear to have been convinced that Scotland should be an independent country.

Some 13 polls have shown a majority for Yes, reaching a peak of 58 percent in a Savanta ComRes poll in mid-December.