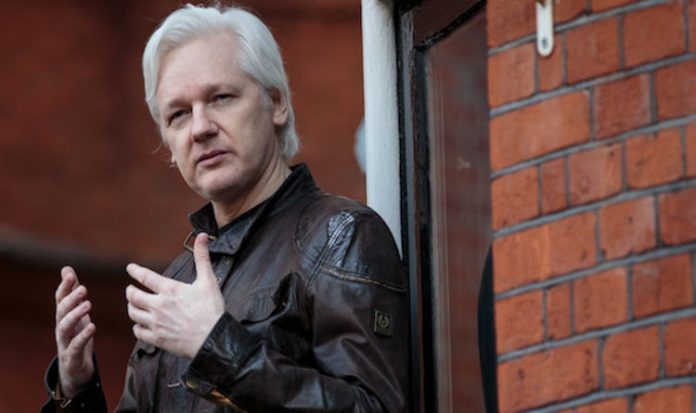 British ministers and foreign office officials have been locked in discussions over Mr Assange’s fate, after he claimed political asylum from Ecuador in 2012 and avoided multiple charges in countries such as US and Sweden.

He has been based at the embassy for six years since he first entered in June 2012.

But now, Foreign Office minister Sir Alan Duncan is said to be involved in the diplomatic effort, which has come weeks ahead of a visit by new Ecuadorian president, Lenin Moreno, who called Mr Assange an “inherited problem”.

He also referred to the exiled WikiLeaks founder as a “stone in the shoe”.

Sources close to Assange claim he was not aware of the talks, but believe America is piling “significant pressure” on Ecuador to give him up, according to the Sunday Times.

The sources claim that America has threatened to block a loan from the International Monetary Fund (IMF) if he is not removed from the embassy, based in Knightsbridge, west London.

Mr Assange has persistently stated that he sought refuge at the embassy for fear he will be extradited to America.

He fears extradition as the original charges brought against him relate to publishing secret and classified documents on Wikileaks, which were obtained by soldier Bradley Manning, who underwent transgender surgery to become Chelsea Manning.

The former Ecuadorian president, Rafael Corra, granted Assange political asylum when he fled to London after being accused of sexual assault and rape in Sweden.

But the new Ecuador premier has fallen out with the controversial figure, and has cut off his internet access, installed jammers and banned visitors to the embassy except for lawyers.

The news follows revelations that 12 Russian spies have been charged with hacking emails belonging to Hillary Clinton and the Democratic National Committee (DNC) during her presidential campaign in 2016.

The US Department of Justice claims the emails were passed to WikiLeaks who published them to “heighten their impact” during the presidential elections.

Mr Assange has been indicted by Robert Mueller, the US Special Counsel leading the investigation into alleged Russian support for Trump during the US presidential campaign.

The indictment claims that stolen documents were then passed on to a group it referred to as “Organisation 1”, which is thought to be WikiLeaks.

Assange has been holed up in the embassy since he entered the building on June 19, 2012.

In 2015, 24/7, round-the-clock Met Police presence and surveillance was removed from the outside of the building due to the high cost to the taxpayer.