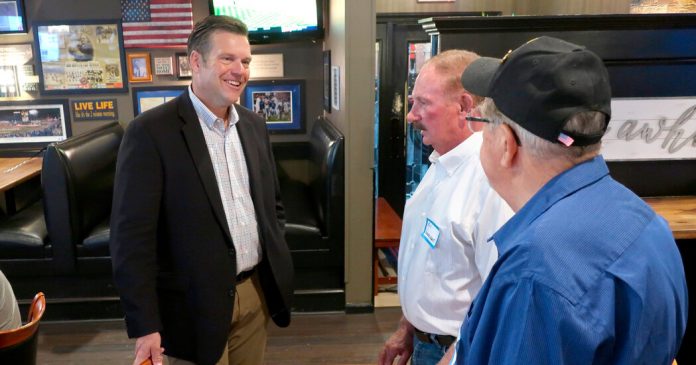 Republican anxieties about control of the Senate are reaching new heights this week as the Kansas Senate primary hurdles to a close, amid fears in Washington that the firebrand candidate and staunch Trump supporter Kris Kobach could win the nomination but lose a longtime red seat in November.

As the national political environment has worsened for the G.O.P., putting a number of traditionally safe conservative seats into play, many Republicans have grown especially focused on Kansas — and concerned that if Mr. Kobach, a polarizing figure in the state, wins on Tuesday, Democrats could take the seat and perhaps gain control of the Senate.

The primary is one of several high-profile contests that will unfold across the country on Tuesday, including the race for the seat of Representative Rashida Tlaib, the prominent progressive Michigan congresswoman, and a sheriff’s race in Maricopa County, Ariz., where the immigration hard-liner Joe Arpaio is running for his former position.

Mr. Kobach, the former Kansas secretary of state who has run for office multiple times, has long been a controversial figure because of his severe views on issues including immigration and voting rights. He has cultivated a devoted conservative following but also discomfited many more moderate Republicans in the process.

His 2018 run for governor — he eked out a primary win with President Trump’s endorsement, only to lose to Democrat Laura Kelly in the general election — further convinced some party leaders that he would uniquely endanger the Senate seat this year, a fear backed by Senate Republican polling. It’s a conviction he dismisses as “establishment” angst.

Mr. Kobach is running in a crowded Republican field against candidates including Mr. Marshall and Bob Hamilton, a businessman who started a successful plumbing company and has lent his campaign several million dollars. Strategists studying the race described a close and fluid contest, and they headed into Primary Day with uncertainty about the outcome. Some were also bracing for a slow tabulation of the results to account for large numbers of mail-in ballots.

It has been 88 years since Kansas sent a Democrat to the U.S. Senate, and the state remains fundamentally conservative terrain. But top Republicans acknowledge that at a challenging moment for their party — as Mr. Trump faces strong disapproval for his handling of the coronavirus crisis — Kansas is not a sure bet in a general election Senate race, especially if a well-known and polarizing candidate is on the ticket.

Still, Mr. Trump remains overwhelmingly popular with the Republican base — he won the state by more than 20 percentage points in 2016 — and party leaders have implored him to endorse Mr. Marshall, whom they consider the strongest potential candidate in a general election. But he has so far stayed on the sidelines, stoking tensions between Capitol Hill and the White House.

The primary battle has been extraordinarily negative, defined by a seemingly constant stream of attack ads leveled on television and in mailers sent to voters.

Mr. Marshall, who represents the “Big First” District in western Kansas — a sprawling seat that often propels statewide Republican victors — has made clear through his own advertising that the size of the field is of great concern. He has singled out in particular Mr. Hamilton and Dave Lindstrom, a businessman and former Kansas City Chiefs player, trying to convince Kansans that supporting those candidates would divide the vote and aid Mr. Kobach.

“Bob Hamilton + Dave Lindstrom = Kris Kobach,” read one mailer from Mr. Marshall’s campaign, the letters sketched on an image of a chalkboard. “Math can be complicated — elections shouldn’t be. A vote for Hamilton or Lindstrom is a vote for Kris Kobach.”

The winner of the primary is expected to face State Senator Barbara Bollier, a retired anesthesiologist who until recently was a Republican, and did not have a significant primary battle of her own.

“Most of the ads that have been run on the Republican side are negative and getting more negative by the moment, so there’s a lot of collateral damage that will be left on the playing field,” said former Gov. Kathleen Sebelius, a Democrat. “It’s always nice in a situation like this to have the opportunity — which Barbara, I think, is taking great advantage of — to introduce herself in a very positive way. To use this time, without a primary opponent, to make sure she’s known, gets to define herself, before Republicans come after her.”

Certainly, Ms. Sebelius acknowledged, running statewide in Kansas is a challenge for any Democrat.

For many religious conservatives, voting for a Democrat is a nonstarter because of their opposition to abortion rights and desire to see conservative Supreme Court justices appointed. And plenty of more centrist, business-oriented voters who recoil from Mr. Trump’s incendiary style are nevertheless reluctant to see a Democratic majority in the Senate.

But the moderate suburbs in the Kansas City area, where Ms. Bollier lives, have moved away from the Republican Party in the Trump era. And some Republicans are concerned that she has benefited from the internecine warfare on their side of the aisle, making her more resilient against the ultimate nominee.

“We had a crowded primary,” acknowledged Chairman Mike Kuckelman of the Kansas Republican Party, who is still optimistic about keeping the seat in November. “It cost a lot of money that could have been used in the general. It’s taken up a lot of time. But that’s the way it goes. I wish it’d been otherwise. I think we’re ready to get it all behind us.”

The post Kansas Senate Primary Has Arrived, and the Anxiety Over Kobach Is High appeared first on New York Times.