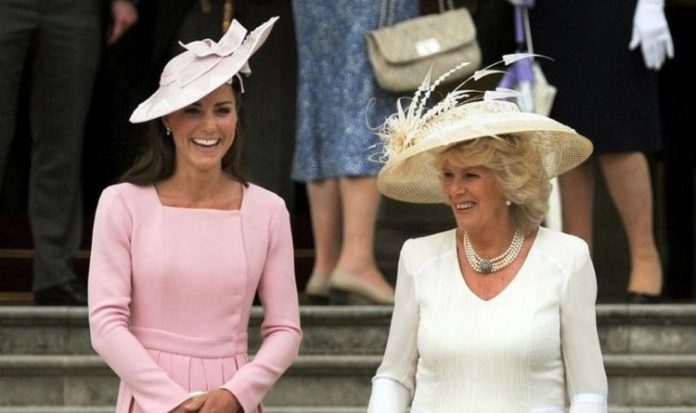 Meghan Markle and Prince Harry wed in a lavish ceremony at Windsor Castle on May 19, 2018. The nuptials took place at St George’s Chapel, and was attended by hundreds of people, including senior members of the Royal Family. Over two years on from the special day, a celebrity biographer has commented on how several royals reacted to the ceremony.

Sean Smith, who has written biographies on Gary Barlow, JK Rowling, Tom Jones and Kate Middleton, has dedicated his latest book ‘Meghan Misunderstood’ to the Duchess of Sussex.

The biography covers her fairytale wedding to Prince Harry and went into detail on how the royals reacted when the couple stood at the altar of St George’s Chapel.

Mr Smith wrote: “When I had watched Harry and Meghan’s wedding in May 2019 – less than eighteen months earlier – the most memorable elements for me were her mother Doria’s quiet grace, the exquisite playing of cellist Sheku Kanneh-Mason, the Kingdom Choir singing ‘Stand By Me’ acapella and the long, passionate sermon by the Most Rev Michael Curry on the power of love.

“As he spoke, the reactions from the Royal Family that we were allowed to see were priceless.”

The biographer detailed the reactions of The Queen, Prince Charles, the Duke and Duchess of Cambridge, and Zara Tindall.

He described the royals as being “fascinated”, “pompous” and “gobsmacked”.

Mr Smith further described Kate and Camilla’s reaction on the day, where he suggested they had to avoid making eye contact, or else they would erupt in a fit of giggles.

He said: “Prince Charles read and re-read the order of service as if it was the latest fascinating issue of Country Life magazine; his wife Camilla and Kate Middleton were desperately trying not to make eye contact with each other.”

JUST IN: Prince Harry urged to ‘stand up to Netflix’ over The Crown ‘ridicule’

The Queen stood in a separate balcony, alongside her Lady in Waiting, Susan Rhodes, at the Foreign, Commonwealth and Development Office building.

Other members of the Royal Family participated in the proceedings, with Prince Charles, Prince William and Earl of Wessex laying wreaths.

Usually, about 10,000 people gather at the Cenotaph in Whitehall for the remembrance service.

But the event was closed to the public this year, in response to the national lockdown.

Meghan Misunderstood by Sean Smith (HarperCollins, £16.99) is out now.