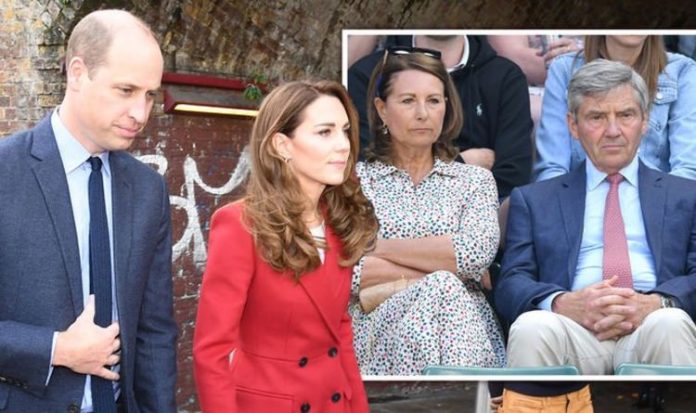 The Cambridges will no doubt be looking to link up with family members after spending months on lockdown since the spring. Under Boris Johnson’s strategy there will be a temporary relaxation of rules on household mixing and social distancing to allow people to gather with loved ones over the Christmas period.

But the rules strictly say no more than three households can form a bubble together.

And the bubble must be consistent from December 23 to 27 – when the ban on household mixing in doors is lifted.

This rule could pose problems for the Duke and Duchess of Cambridge if they are hoping to meet up with the wider Middleton clan.

Carole and Middleton are empty nesters at their country mansion in Bucklebury, Berkshire.

While their son James and his fiancée Alizee Thevenet stayed at the Middleton family home during the first national lockdown, they have since left.

The soon-to-be newlyweds, who were forced to postpone their wedding due to the coronavirus crisis, are staying on the stunning Glen Affric estate in Scotland.

The sprawling Victorian hunting lodge set in an estate of thousands of acres of lochs and mountains in the Scottish Highlands is owned by Pippa Middleton’s father-in-law David Matthews.

Because of the couple’s decision to spend the second nationwide lockdown in Scotland, they are considered a separate household to James’ parents.

The last time the Cambridges spent Christmas with the Middleton was in 2016, when Prince George was aged three and Princess Charlotte was just 19 months.

For the past three years the family has spent Christmas with the Queen and the extended Royal Family at Sandringham.

The monarch’s Christmas plans have yet to be revealed, however it emerged earlier this year that she has cancelled her annual trip to church on Christmas morning.

Due to the fact that the Queen is 94 and Prince Philip is 99, it is likely the pair will be advised against large gatherings over the Christmas period.

While they did meet their grandchildren and great-grandchildren over the summer holiday at Balmoral, all meetings were strictly done from a safe social distance.

This would no doubt pose a challenge for Kate and William if they brought their young family to enjoy Christmas dinner with the Queen and the Duke of Edinburgh.

Therefore, a more sensible option for the monarch would be to form a bubble with Prince Charles and the Duchess of Cornwall.