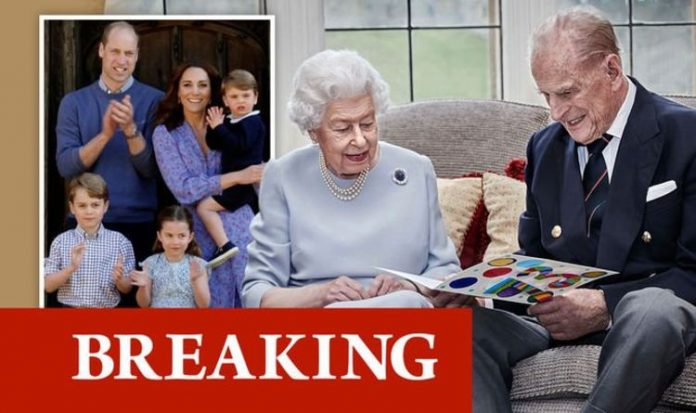 Kate and Prince William’s official Twitter account shared the Cambridges’ best wishes to the elderly couple on their wedding anniversary. They wrote on the Kensington Royal account: “Wishing a very happy wedding anniversary to Her Majesty The Queen and His Royal Highness The Duke of Edinburgh!”

In the tweet, the Cambridges included the newly-released portrait of the Queen and Prince Philip and the card their children Prince George, Princess Charlotte and Prince Louis have made for their great-grandparents.

The cheerful message also includes another picture with a close-up on the card made by the children.

The Queen and Prince Philip are celebrating their milestone wedding anniversary privately at Windsor Castle, where they have been self-isolating together since the beginning of the second lockdown.

Kate, Prince William and their children are believed to be at Kensington Palace, as Prince George and Princess Charlotte are enrolled at Thomas’s Battersea school in south London.

Buckingham Palace released yesterday a heartwarming portrait of the Queen and Prince Philip, in which the couple looked smiling at the card Prince George, Princess Charlotte and Prince Louis made for them.

For this important portrait, the Queen decided to wear the Chrysanthemum Brooch – the same she donned in portraits taken during her honeymoon more than seven decades ago and in pictures marking the couple’s 60th wedding anniversary in 2007.

The Queen and her husband also spent the first national lockdown together, staying at their Berkshire castle between March 19 and early August.

They then left to spend their summer break in Scotland, where Kate, William and their children visited them.

Other royals, including the Wessexes and Princess Eugenie, also headed north to hold socially-distanced meeting with the Queen and Philip.

The monarch and the Duke left Balmoral in mid-September, when they decided to spend a few weeks together at Wood Cottage.

In October, Prince Philip remained at his home in Norfolk, while the Queen returned to Windsor Castle to resume her royal duties.

The monarch met again her grandson Prince William during her first royal visit since March, when the pair met together staff at Porton Down and opened a new facility at the science park in Wiltshire.

Hours before Prime Minister Boris Johnson announced a second national lockdown, the Queen travelled to Norfolk to spend a weekend there with Prince Philip.

As confirmed by Buckingham Palace at the time, at the beginning of the following week they returned together to Berkshire.

The Queen and Prince Philip usually spend their Christmas break at Sandringham House with several members of the Royal Family.

However, the uncertainty created by the coronavirus pandemic could disrupt their three-decade-long tradition and see the couple remain at Windsor throughout December and the beginning of the new year.