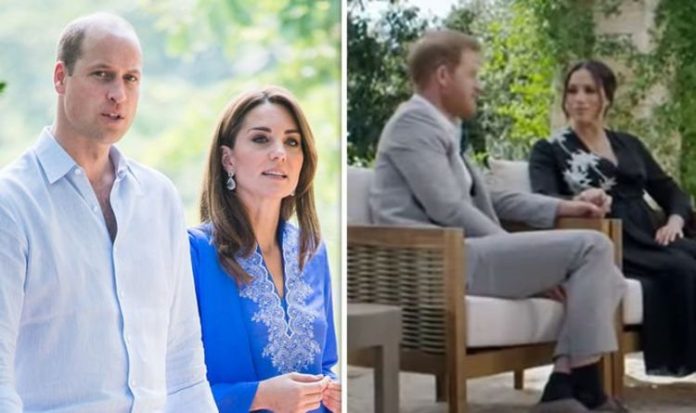 The Duke and Duchess of Sussex are set to spill the beans about their time within the Royal Family in an upcoming interview with Oprah Winfrey. In the two-hour special airing on ITV on Monday, the couple are expected to talk about their difficulty dealing with public and press scrutiny, which they have touched on in previous interviews. In a clip released this week, Harry said he feared “history repeating itself” in reference to his late mother Princess Diana.

However, Harry is not the only royal husband who has been concerned for their partner’s privacy over the years.

Prince William has always been very protective of Kate, requesting that the press leave her alone while they were dating.

However, one breach of privacy in 2012 ‒ the year after their wedding ‒ was particularly egregious to the couple.

Long-lens pictures were taken of the Duchess of Cambridge sunbathing topless on a terrace of a guest house and were published in a French magazine.

Prince William and Kate were furious about the long-lens photographs (Image: GETTY / CBS)

Kate and William on their Diamond Jubilee tour in 2012 (Image: GETTY)

The royal couple were on holiday in Provence, France, at the time and staying at a chateau owned by the Queen’s nephew Lord Linley.

The Cambridges were taking a break ahead of the Diamond Jubilee tour of southeast Asia and the South Pacific on behalf of the Queen.

Officials who toured with them in Malaysia claimed they were furious and hurt by the publication of the photos.

William and Kate reportedly did not know anything about the pictures until the magazine’s website showed an image of its new front cover with a heavily-pixelated image of a woman that it claimed was the Duchess in a bikini, about to remove her top.

William and Kate in Singapore for the Diamond Jubilee tour (Image: GETTY)

A couple of days later, the French magazine came out with the pictures of topless Kate on the cover.

It was reported that photos were offered to British newspapers but they all turned them down.

A spokesman for the Cambridges told the Daily Mail at the time: “Their sadness has turned to anger and disbelief as we have learnt more about the photographs.

“We believe a red line has been crossed and we are consulting the French lawyers to see what, if any, action can be taken.”

Kate and William in the Solomon Islands on their royal tour in 2012 (Image: GETTY)

Royal aides released an official statement which read: “Their Royal Highnesses have been hugely saddened to learn that a French publication and photographer have invaded their privacy in such a grotesque and totally unjustifiable way.

“The incident is reminiscent of the worst excesses of the press and paparazzi during the life of Diana, Princess of Wales, and all the more upsetting to the Duke and Duchess for being so.

“Their Royal Highnesses had every expectation of privacy in the remote house.

“It is unthinkable that anyone should take photographs, let alone publish them.

GMB: Expert on timing of Meghan and Harry’s Oprah interview

“Officials acting on behalf of Their Royal Highnesses are consulting with lawyers to consider what options may be available to the Duke and Duchess.”

As the pictures came out just before their high-profile tour, observers noticed their anger when they arrived in Malaysia.

As they walked to an awaiting jet along a 200-yard red carpet laid out at the Bunga Raya VIP area at Kuala Lumpur International Airport, William did not look left or right for most of the walk and clenched his teeth.

Kate managed a few smiles and placed her hand reassuringly on her husband’s back, but there were glimmers of frustration too.

WIlliam and Kate ended up suing the publication, which resulted in the judge ordering them to pay the couple €100,000 (£86,000) in damages.

This was not the first time Kate has been taken off guard by the paparazzi.

In 2005, William issued his first angry letter to the press after Kate was followed by a photographer all day.

In 2007, Kate had to walk down a gauntlet of around 30 photographers and cameraman, who had gathered outside her flat on her birthday.

This also resulted in the couple consulting lawyers and several newspapers in the UK agreed to stop publishing any paparazzi shots of Kate.

Meghan and Harry have previously opened up about their struggle in the spotlight, but the bombshell interview with Oprah is likely to dive into this deeper than ever before.