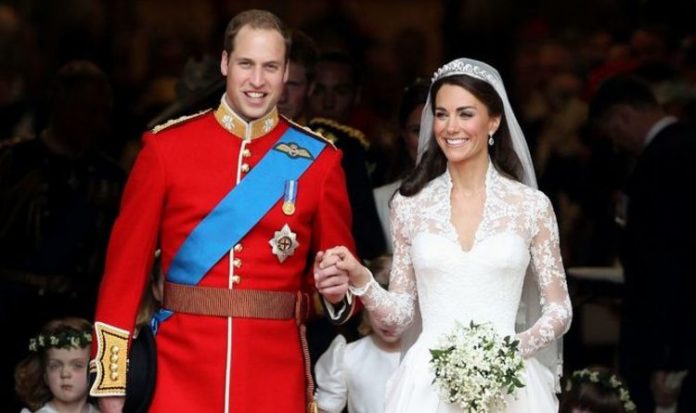 The Duke and Duchess of Cambridge married in April 2011. They will celebrate their tenth wedding anniversary this year. Kate and William had an incredible eight-tiered fruit cake on their wedding day.

Baker Fiona Cairns created the masterpiece and took five weeks to make it.

The cake was covered in cream, detailed white icing and 900 delicate sugar-paste flowers.

Most of the impressive dessert was eaten on the Cambridges’ wedding day, but the royal couple decided to save the top tiers for their future children’s christenings.

In 2013, guests were treated to the cake at Prince George’s christening.

Then in 2015, the cake was again served after Princess Charlotte’s christening during a tea party at Sandringham House.

Finally, in 2018 when the cake was seven years old, guests enjoyed the dessert again at Prince Louis’ christening.

They wrote: “One of the three top tiers of The Duke and Duchess of Cambridge’s eight-tier wedding cake will be used for the Christening cake.”

READ MORE: Kate Middleton ‘less formal’ and ‘expresses self’ when without William

She said: “In many ways, I would say that Kate designed her wedding cake, because she knew very clearly what she wanted and did not want.

“The ideas came from her, we had meetings with her, and the brief was from Kate.”

She told Today Food that a traditional British wedding cake features three tiers which each serve a different purpose.

Ms Carlson added: “The bottom is meant for eating at the ceremony, while the middle is to be served after the event.

“The top tier is then preserved for the couple’s first child’s christening.”

She added: “It is British tradition to have all-fruitcake wedding cakes, but with time, there has been more creativity in the tradition and all sorts of cakes are seen.”