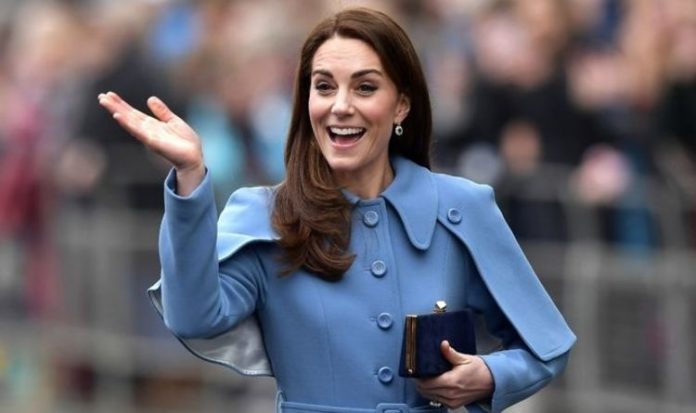 The Duke and Duchess of Cambridge hosted Ukraine’s President Volodymyr Zelenskyy and his wife Olena at Buckingham Palace on Wednesday, but it appears Kate made a second outing that day too. According to the Court Circular, which details the Royal Family’s daily activities, the Duchess visited a London landmark which is popular with her three children, Prince George, Princess Charlotte and Prince Louis.

Kate visited the Natural History Museum in South Kensington on Wednesday afternoon and met with Fiona McWilliams, the Executive Director of Development.

The Duchess became patron of the London museum in 2013, following in the footsteps of Prince William’s late mother Princess Diana, who held the patronage for four years until 1993.

The meeting will come as a surprise to royal fans, as the visit was not officially announced by the Palace.

No official photographs of the visit have been released and it is not known what the pair discussed.

Kate has previously revealed she and her children love visiting the Natural History Museum.

In 2017 she gave a speech and said: “Like many of you here tonight, I remember visiting the Natural History Museum as a child, and being inspired with a love of nature.

“And now, as a parent myself, I am experiencing the joy all over again with my own children, who adore coming here, and it is not just to see the T-Rex, mind you.”

The Duchess’ last public visit to the London museum was in October 2019 to hear how the Angela Marmot Centre (AMC) is protecting UK wildlife.

JUST IN: William and Kate prepare for their future roles as King and Queen with major change

Analysing environmental DNA, scientists can detect and identify the miniscule insects and microorganisms that play an important role in healthy environments.

The Duchess was showed some of the DNA sequencings in action.

Kate’s secret visit on Wednesday came after she attended her first official event at Buckingham Palace with husband Prince Husband since the start of the coronavirus pandemic.

The couple welcomed the Ukraine President and First Lady.

The royals were photographed sitting in front of the presidential couple, laughing with them.

During the meeting, the couples rigidly followed social distancing rules in place in the UK and stood two metres apart from each other.

They also refrained from shaking their hands.