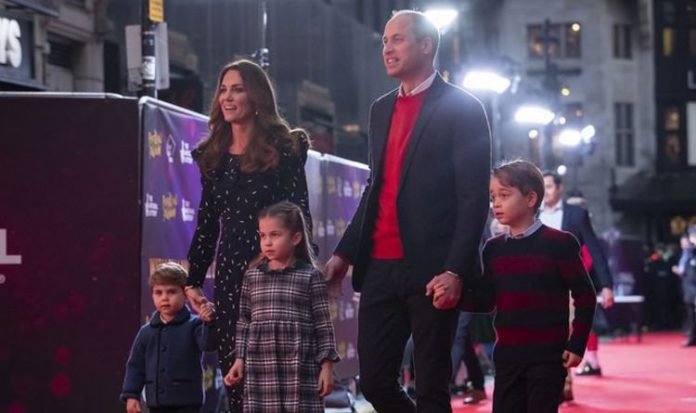 Prince William and Kate Middleton have decided to bring their two eldest children to more royal engagements next year. As part of the couple’s planning for 2021, the Duke and Duchess of Cambridge have decided to step up Prince George and Princess Charlotte’s royal duties. They want to give both George and Charlotte more public exposure in the future, after Kate and William “have loved watching them grow and develop over the last year”.

Us Weekly correspondent and co-host of Royally Us Christina Garibaldi remarked: “If you enjoyed seeing them at their recent red-carpet appearance, then you are in luck.

Co-host Molly Mulshine added: “Yes, apparently they are going to be attending a lot more royal engagements which is exciting but also surprising.

Ms Garibaldi responded: “It is surprising. They have said they will do royal engagements.

“However, it won’t interfere with their school so don’t worry, they won’t be pulling them out of school to attend anything.

“It does seem a little surprising. They are a little young, and especially with everything going on in the world. But it was so adorable seeing them out and about.”

Ms Mulshine said: “I think the David Attenborough video they did was a highlight, I would love them do more things like that.”

The news came as a royal source told Us Weekly: “William and Kate have loved watching Prince George and Princess Charlotte grow and develop over the last year.

The source added: “It’s their favourite time of year.”

Earlier this month, William and Kate’s kids made their red carpet debut at The Palladium’s special performance of The National Lottery’s Pantoland.

The special performance was held to honour frontline workers amid the coronavirus pandemic.

Also this month, the Duke and Duchess of Cambridge faced criticism for seemingly breaking restrictions when attending a light show at the same time as the Earl and Countess of Wessex.

A source at Sandringham conceded that “it was difficult to keep the two family groups apart” as they explained that the Cambridges and Wessexes arrived in two separate parties and that attending together had not been intentional.