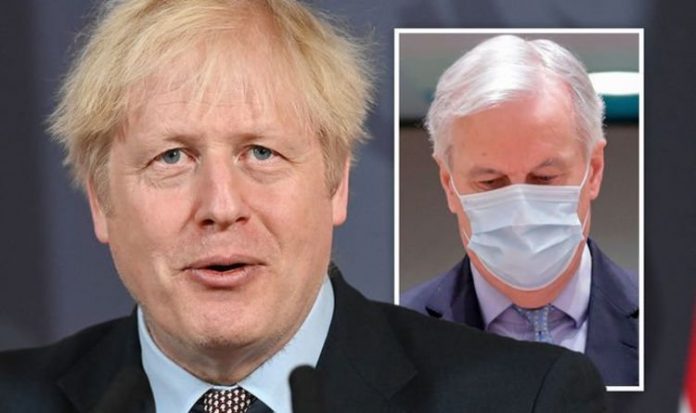 In a huge show of support they said the historic agreement will enable the UK to free itself from the shackles of Brussels and unleash its potential as a global economic power. The backing comes just days before Wednesday’s crunch Parliamentary vote on the deal. Brexiteer Andrew Bridgen, said: “If you look at it, things can only get better for us and the EU’s position will be weakened.“Britain will be stronger for this deal.”

The agreement was reached on Christmas Eve after months of fraught talks on issues including fishing rights and business rules.

Scrutiny of the treaty started when the 1,246-page document was officially published on the morning of Boxing Day, less than a week before the transition period comes to an end.
Mr Johnson has said that the “devil is in the detail” of the deal and he believes that it will be accepted by Brexiteers.

Eurosceptic Tory MP John Redwood said: “Once out of the EU it is up to us. There is much talent, innovation and capital in our country raring to go.

“It is time to unleash it, and have the fastest growing year any of us have experienced.”

Mr Bridgen added: “If you had offered me what we’ve got here back in 2016 I wouldn’t have snapped your hand off, I’d have had your arms and your legs as well.”

The ERG has convened a self-styled “star chamber” of lawyers led by veteran Eurosceptic MP Sir Bill Cash to examine the full text ahead of the Commons vote.

Sir Iain Duncan Smith, the former Tory leader, said the group’s lawyers were “far better than anything the government has got”.

He said: “The government legal service make so many mistakes in European treaties. Time and again the EU tricks them. We will do them a favour by exposing what they have got rather than what they say they have got.”

He added: “We had 25 days of debate on the Maastricht treaty.”

In an interview with the Sunday Telegraph in the hours after brokering the deal on Thursday, Mr Johnson said that “a great Government effort” has gone into compiling plans for when the Brexit transition ends on December 31.

But he said it “perhaps would not have been fruitful” to discuss them publicly during negotiations, as he listed animal welfare regulations, data and chemicals alongside existing plans to establish low tax freeports.

The deal contains commitments not to regress on standards for workers’ rights and environmental standards, which is a bone of contention for some Brexiteers.

But, Mr Johnson said: “All that’s really saying is the UK won’t immediately send children up chimneys or pour raw sewage all over its beaches. We’re not going to regress, and you’d expect that.”

Senior Conservative backbencher Sir Bill said “sovereignty is the key issue” as his team analysed the small print of the deal.

No 10’s chief negotiator Lord Frost hailed the deal as beginning a “moment of national renewal” that he argued means the UK “sets its own laws again” by ensuring there is “no more role” for the ECJ.

The agreement is likely to be passed by Parliament, with Labour supporting it, as the alternative would be a chaotic no-deal situation on January 1.

About 10 Tories are expected to rebel. But the bigger rebellion could be in Labour ranks over leader Sir Keir Starmer’s decision to vote for the deal. He is braced for six frontbench resignations and around 20 rebel MPs.