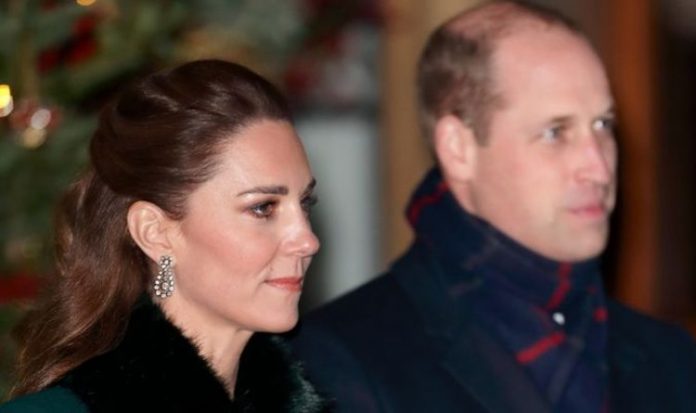 Kate, the Duchess of Cambridge and Prince William concluded their three-day tour in Windsor as they reunited with the Queen for the first time since the first lockdown begun in March. Despite the Palace defending the Duke and Duchess of Cambridge’s decision to defy travel limitations in Scotland and Wales because of work, the pair have been facing backlash for their travelling. ET Canada contributor Kathleen Newman-Bremang said: “Insensitive is maybe not the right word.

“Tone-deaf I saw in a lot of headlines, that to me sums it up.

“They’re saying this tour is supposed to be a morale booster for the frontline workers.

“I see it more as a photo-op for them, I don’t know what they think they are boosting by breaking protocol, by setting a bad example.

“I don’t think the people are going to think, ‘William and Kate are travelling, so I can travel,’ but it does not set a good example.

JUST IN: Queen unveils her seven new frontline royals who will ‘make up for lost time’ in 2021

“It doesn’t tell people not to travel, which is what our healthcare professionals are telling people.”

Ms Newman-Bremang also said she welcomed some of the backlash Kate and William have faced in the past few days as it has them “take some flack” off Meghan Markle and Prince Harry.

She continued: “I’m happy Will and Kate are finally taking some heat because Meghan and Harry get flack just for breathing.

“They are finally taking some on the brunt of that, which I appreciate.

Kate and William have stepped up to the plate over the past few months to support the Queen as she remains shielded because of the coronavirus.

The Duke and Duchess visited Scotland and Wales between Monday and Tuesday, meeting with NHS staff and volunteers to thank them for their efforts during the pandemic.

The royal couple is believed to be part of a revolutionising restructuring of the Royal Family front-line in the wake of Prince Harry and Meghan Markle’s departure from the Firm.

The Cambridges were part of a group of senior royals whom the Queen insisted to have at her side for a special celebration of carers at Windsor Castle at the end of their British tour.

Prince Charles and Camilla, the Duchess of Cornwall joined William and Kate alongside Prince Edward and Sophie, the Countess of Wessex and Princess Anne to pay tribute to the hard work of the NHS and volunteering organisations.