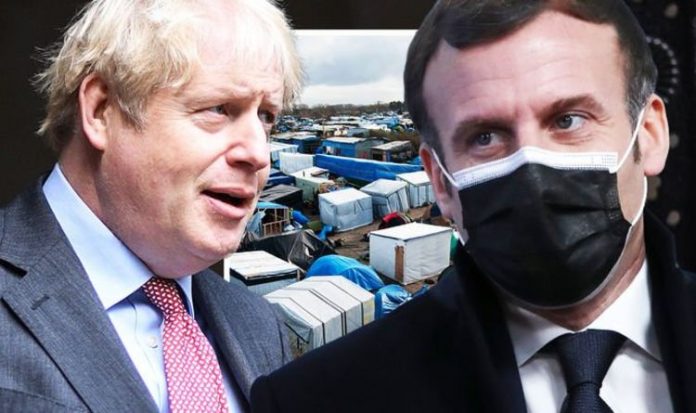 Brexit: Robert Jenrick calls on the EU to show ‘movement’

A new deadline of Sunday has been set, the date which any agreement must be made by, as Foreign Secretary Dominic Raab said it was “unlikely” negotiations would extend beyond this.

In the preceding weeks, negotiations were thought to have been going better than usual.

Then, the EU was accused of making “ridiculous” demands on fishing access, calling for ten years of unfettered access to the UK’s waters as the price of a deal.

Brexit news: France has pitted itself as one of the UK’s main enemies during Brexit talks (Image: GETTY)

It was a move widely interpreted as resting on France’s word, as the country enjoys a disproportionately large share of fishing grounds, around a quarter of its total catch coming from Britain’s fish-rich waters.

President Macron went as far as to threaten to scupper talks after he declared he would veto any agreement France was not satisfied with.

Mr Macron’s France is now regarded as one of the main diplomatic hurdles, with EU leaders appearing to urge the country to concede ground, including Germany’s Chancellor Angela Merkel, who asked for “compromise” on both sides to get a deal over the line shortly after the veto news.

France has pitted itself as the UK’s main opponent since the historic Brexit vote.

JUST IN: Peny Mordaunt lashes out at Labour for RUINING Brexit negotiations

Sunday deadline: The two parties gave Sunday as the final deadline to broker a deal by (Image: GETTY)

Following the ballot in 2016, French opposition politician Xavier Bertrand called on then President François Hollande to terminate the Le Touquet Treaty, a bilateral deal authorising British border controls on French soil in order to curb the number of migrants crossing from Calais and other ports into England.

Mr Betrand, now President of the Region Hauts-de-France which contains Calais, at the time wrote in a tweet: “I appeal to François Holland and I demand the denunciation of the Agreement of Touquet.”

He later told The Daily Telegraph that following Brexit, the UK must take back all aspects of its borders.

Xavier Bertrand: The right-wing heavyweight called on the arrangement with the UK to be revised (Image: GETTY)

François Hollande: The former President did not entertain Bertrand in his demands (Image: GETTY)

“Boris Johnson wanted change and he got it with Brexit. So do we.”

He added: “The days when the French handled the whole burden and the British signed a cheque are over.

“To date, the means they have put into it have been largely cosmetic, that has to stop.”

The agreement, signed in 2003, allowed the UK to set up checkpoints in Calais and Dunkirk, with Britain also running “juxtaposed” immigration checks from the Eurotunnel terminal at Coquelles and Paris Gare du Nord and Brussels Midi stations.

Brexit timeline: If a deal is not reached the UK and EU will trade on WTO terms (Image: Express Newspapers)

Mr Betrand’s words fell on deaf ears, and the UK and France have since partnered to bolster security.

At the end of November, Home Secretary Priti Patel and her French counterpart Gérald Darmanin agreed on plans to make the channel crossing route – used by more than 8,000 people in 2020 – unviable.

The pair negotiated on rolling out double the number of French police patrolling a stretch of coastline targeted by people-smuggling networks.

Enhanced technologies to catch smugglers will also be used, with improved surveillance, drones, radar equipment and optronic binoculars to be introduced.

The agreement also covers support for migrants in looking and securing accommodation in France, and measures to target other ports in the country, especially in the north and west.

More crossings from France into England have been successfully intercepted in recent weeks, the proportion of detainees rising from 41 percent last year to 60 percent today.

The major obstacles are fishing rights, business competition rules and how a deal will be policed.