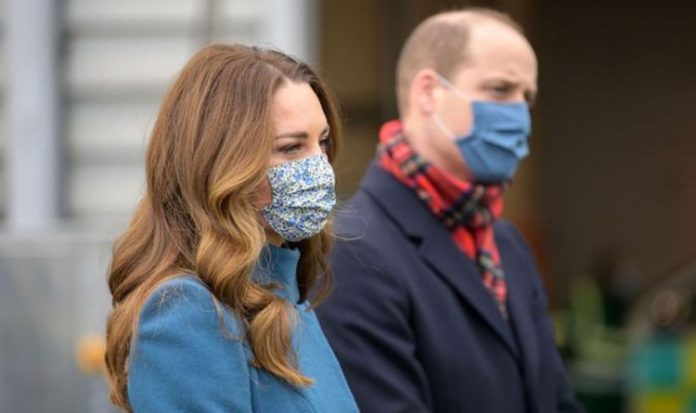 Furious royal critics said the Duke and Duchess of Cambridge are not setting “a good example” to members of the public during the COVID-19 pandemic as they travel across the UK for their whistle-stop tour of England, Scotland and Wales. Royal fans accused the pair of “sticking two fingers up” to the British public as they travel between places, which are under different tier systems to fight the invisible killer disease.

They said despite Kate and William’s endeavours to boost morale across the nation, the pair were actually taking part in “non-essential travel” in the height of the crisis.

One tweeted: “Not a great example to set, travelling between counties in different tiers.”

Another posted: “Not really showing a good example to the country we are staying in keeping loved ones safe, not seeing people we care about and they are touring the UK it honestly feels like they are sticking two fingers up and saying we can do as we like.”

A royal fan wrote on Twitter: “This is classed as non-essential travel during a pandemic, to very high alert areas. They will be travelling from tier 2 to tier 3 areas.”

Another said: “Much of the central belt of Scotland is under Tier 4 lockdown, but these two can obviously bypass what the average person cannot, why?

One added: “They should wear masks even outdoors that close to people. Jesus Christ.”

While more than two million Scots are faced with Level 4 restrictions, which are equivalent to an English lockdown.

Under Scottish regulations, people are ordered to not travel between Scotland and the rest of the UK unless they have a reasonable excuse, including work, education or essential shopping.

Wales last week announced it will remove its coronavirus border restrictions to English citizens in Tier 1 and Tier 2 areas.

But travel into Tier 3 areas in England will still be prohibited under the regulations.

Kate and William kicked off their country-wide tour in Newbridge, near Edinburgh, this morning.

The couple travelled overnight on the Royal Train after setting off on Sunday evening from London’s Euston station on the three-day tour, which will see them thank communities, outstanding individuals and key workers for their efforts during the coronavirus crisis.