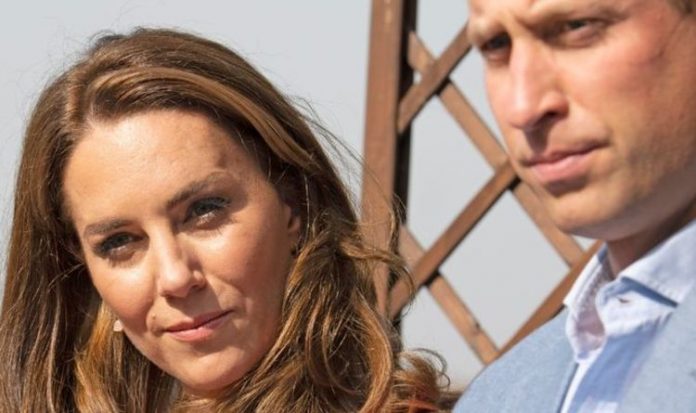 The Duchess of Cambridge and Prince William will not be going to Sandringham in Norfolk this Christmas after the Queen announced she and Prince Philip will spend Christmas just as a couple at Windsor Castle after deciding to enjoy the festive period “quietly”. ITV’s Royal Rota hosts Chris Ship and Lizzie Robinson discussed what Christmas this year will be like for the Royal Family. Mr Ship suggested that Kate and William might want to visit the Middletons this year.

Ms Robinson said: “The Queen and the Duke of Edinburgh decided this year that they will spend Christmas quietly in Windsor.

Mr Ship added: “Competing demands like in-laws and other families?

“For example, William and Kate might want to go see the Middletons.

“If they see the Middletons then Kate’s brother, James, might be there or Pippa.”

Ms Robinson added: “We’ve got very strict rules here and even though over Christmas they’re being relaxed a little bit, it can only be three different households.”

The Queen and her consort, who are both in their 90s, are expected to see some members of their family briefly in accordance with guidelines but Christmas celebrations are likely to involve just the couple.

It is understood the Queen will not be attending church on Christmas Day to avoid large crowds of well-wishers gathering.

A Buckingham Palace spokeswoman said: “Having considered all the appropriate advice, the Queen and the Duke of Edinburgh have decided that this year they will spend Christmas quietly in Windsor.”

The Prince of Wales and the Duchess of Cornwall will spend Christmas Day at Highgrove, their Gloucestershire home, but are expected to see the Queen and Philip at Windsor over the holidays, with Camilla also visiting her family.

It is not known where William and Kate will celebrate the festive period but they may, as they have in the past, spend it with Kate’s parents who live in the same county as the Queen in the Berkshire village of Bucklebury.

William could visit his grandparents with his family and remain socially distanced.

The Duke and Duchess of Sussex will remain in the US.

Under a relaxation of the coronavirus rules, three households can mix from December 23 to 27, but the bubble must be exclusive over the five-day period, meaning people cannot shift from one group to another.

Prime Minister Boris Johnson has warned families they must make a “personal judgment” about the risks of coronavirus to vulnerable loved ones.

The restrictions also mean the Queen will not be able to host her traditional pre-Christmas lunch at Buckingham Palace when the wider royal family usually gathers each year for a get-together a week or so before Christmas.