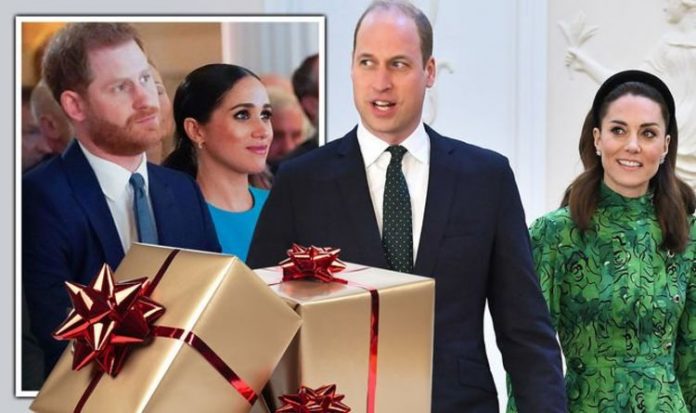 The Duke and Duchess of Cambridge have reportedly mailed their gifts to Meghan Markle and Prince Harry, who are spending Christmas in California. However, following the outbreak of a new strain of COVID-19 in England, many countries have placed restrictions on the UK which has led to chaos for couriers across Britain as Christmas approaches.

Hollywood Access said regarding the Royal couple’s Christmas plans: “Meghan Markle and Prince Harry are in the Christmas spirit.

“According to People Magazine, the royal couple are exchanging sweet gifts with Kate Middleton and Prince William.

“The Royal Families are mailing their festive gifts to each other since they will be apart due to the COVID-19 pandemic.

“The Duke and Duchess of Sussex will have a California Christmas and spend the holiday with their son Archie.

“Kate and William’s holiday plans have not been announced following the cancellation of the Royal Families Christmas gathering at Sandringham estate.”

This follows news that the Duke and Duchess of Sussex plan to publish their official family Christmas photograph.

Omid Scobie, the author of Finding Freedom, revealed that Meghan Markle and Prince Harry’s family photo is “on its way”.

The royal commentator said: “Well one thing we get to indulge in as well at this time of year are royal Christmas cards.

“But it’s also been a very busy week for royal news, we’ve had huge announcements from the Sussexes.

“From the Duchess of Sussex’s sort of first public business investment to the announcement of a deal with Spotify.”

Prince Harry and Meghan Markle revealed last week that they had agreed to a lucrative deal with Spotify to produce a podcast on the platform.

This follows the Duke and Duchess of Sussex’s agreement with Netflix, which was announced earlier this year, to produce content for the streaming service.