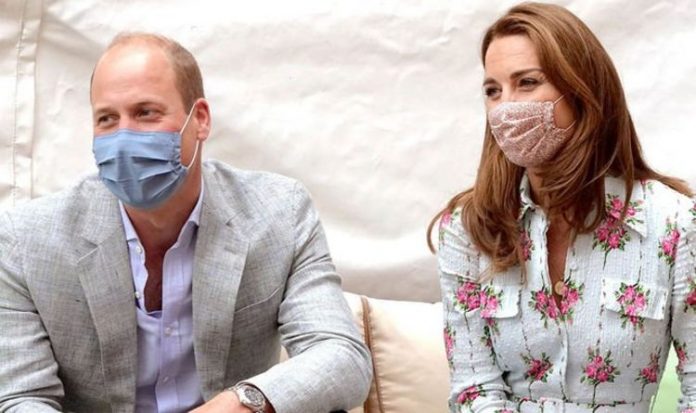 Kate and Prince William are the “epitome” of the the phrase “actions speak louder than words”, according to fans of the Cambridges. Royal fan Kayla Adams compiled a list of “promises” kept by the royals in a touching Twitter thread.

Starting with William’s commitment to fight the illegal ivory trade, as well as Kate’s involvement with charities focused on children’s mental health, the royal fans said the couple have delivered again and again.

Mentioning the Duchess of Cambridge’s work to improve children’s wellbeing, Ms Adams wrote: “The Duchess promised to help children and their mental health.

Sharing pictures of Kate’s visit at The Nook, one of the East Anglia’s Children’s Hospices’ purpose-built hospices, Ms Adams added: “A little cute one.

“Kate promised the parents of Fraser Delf she would plant a sunflower in his memory.

“When she visited The Nook days later, she potted a sunflower for the Delf family. ACTIONS”.

The royal fan also recalled Kate and William’s pledge to put the mental health of key workers at the forefront of their work in 2020.

After listing a few of the work carried out by the pair, including Kate’s efforts to gather donations for baby banks and the support to the online platform Our Frontline, Ms Adams wrote: “They DELIVERED. ACTIONS”.

Ending her long thread on Twitter, the royal fan wrote: “I hope you enjoyed looking at some of the promises the Duke and Duchess have made through the years & followed through on.

“They are the epitome of ‘Actions speak louder than words’.

“This is just one of the many reasons why we love them.”

Other Cambridges’ fans welcomed this list of successes and achievements.

Twitter user Debra Lubbe wrote: “A shining example of how it should and can be done.

“I adore this beautiful couple.”

Fan account The Cambridges added: “They are the best and will be amazing King and Queen when the time comes”.

Michelle Odvody added: “They truly are just honest wholesome beautiful people who truly care about others.”

Kate and Prince William have worked throughout the pandemic from their home in Norfolk, Anmer Hall.

The couple moved there from their home in London, Kensington Palace, in late March, when the Government shut down schools for every pupil but essential workers’ children.

From there, they publicly backed Our Frontline, the platform launched by several mental health charities including Mind which has been providing 24/7 online support to key workers and those on the frontline.

Kate and William also continued to stay in touch with their patronages and launched new projects.

The Duchess, an amateur photographer, urged Britons to take part in a photography contest launched in collaboration with the National Portrait Gallery to depict the spirit of the nation on lockdown.

She also continued her work with young children leading a virtual school assembly in which she highlighted the importance of kindness and reaching out to others in trouble.

Kate and William also carried out important work behind the scenes.

As unveiled earlier this month, the Duchess of Cambridge has secretly led a donation campaign to baby banks, which eventually resulted in thousands of items distributed across the country.

Kate was pushed to do this after visiting a baby bank in West Norfolk and “bursting into tears” on her way home.