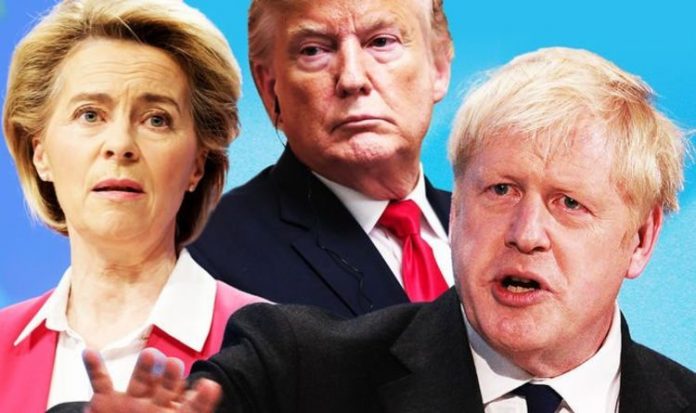 International Trade Secretary Liz Truss met her US counterpart in Washington for the third round of talks to reach a trade deal between the two countries earlier this month. Prime Minister Boris Johnson put an agreement with the US at the heart of his plans to revive Britain after Brexit, and Ms Truss’ decision to travel during the coronavirus pandemic highlighted London’s willingness. Before the talks, the Department for International Trade said in a statement: “The Secretary of State is meeting Robert Lighthizer during a critical time in the negotiations.

“It is essential we agree on the next steps and priorities for the trade talks.

“A deal will be a key driver in leveling up the UK by boosting the economy by £15billion and removing almost half a billion pounds worth of tariffs.”

However, despite Ms Truss’ visit, the talks have been beset by disagreements and Mr Lighthizer said a deal is “unlikely” to happen this year.

The news that the EU and the US have struck a “mini trade deal”, though, has renewed hope that something similar could be agreed for the UK.

In a coordinated announcement this week, Brussels and Washington announced the EU would ditch tariffs on live and frozen lobsters imported from the US, in exchange for the US halving tariffs on a range of EU manufactured products, including glassware and ceramics, disposable lighters and some prepared meals containing fish.

The move marks the first negotiated tariff reduction between the two sides in more than 20 years.

Mr Lighthizer and the outgoing EU trade commissioner Phil Hogan said in a joint statement: “We intend for this package of tariff reductions to mark just the beginning of a process that will lead to additional agreements that create more free, fair, and reciprocal transatlantic trade,”

Mr Lowe had previously said on Twitter in July: “Unless the UK is willing to give the US everything it wants, particularly on agriculture/food, it is not likely likely that there will be a comprehensive deal reached this year.

“It is still possible that the UK and US agree to a mini, or phase one, deal to provide a political win.

“Trump has concluded a few agreements, e.g. upgrade Korea, China deal, Japan deal that are executive competence and do not require congressional sign off.”