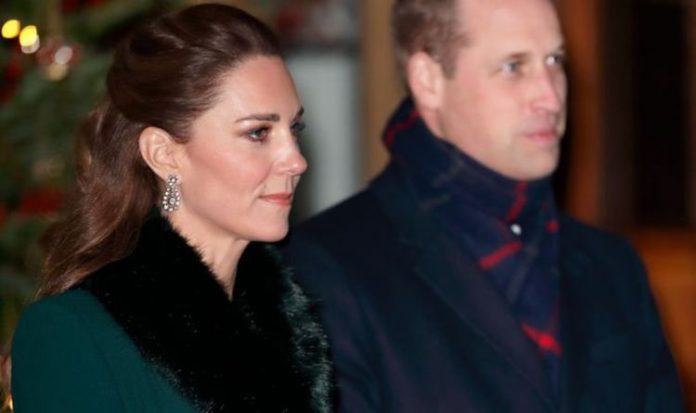 The Duke and Duchess of Cambridge originally planned to travel to Bucklebury in Berkshire to spend the festive season with Kate’s family, along with the Duchess’s sister, Pippa Matthews and her husband James and their son Arthur.

Last week, both Berkshire and London were moved into Tier 3 and the Cambridges offered to host Christmas at their Norfolk home, Anmer Hall.

However, over the weekend, Prime Minister Boris Johnson announced families across the country can only spend Christmas Day with each other and banned widespread travel to stop the spread of the virus.

But the new restrictions mean the Cambridge’s Christmas plans – like thousands of other families across the country – have been ruined again.

Kate’s mother, Carole Middleton, previously said she has been changing up her traditional Christmas celebration by using video calls.

The Queen has also faced heartbreak this year and has been forced to have a stripped-back Christmas.

Her hopes of having a socially distanced, festive visit from the Prince of Wales this week were dashed when Windsor was put into Tier 4.

For the first time in 33 years, the Royal Family’s annual Christmas in Sandringham was made impossible due to the coronavirus pandemic.

Queen Elizabeth II and Prince Philip usually host members of the Firm for Christmas in their Norfolk home.

“The Duke and Duchess of Cambridge will spend Christmas with their children as a family of five at their Norfolk home, Anmer Hall.”

Despite the new measures being imposed since the Queen recorded her Christmas message, it will not be rerecorded before it is broadcast.

Royal sources have said it was written very carefully with a “very broad brush” due to the ongoing situation.

Earlier this year, it was revealed the Queen has ruled out attending church in the Christmas royal tradition in a bid to prevent the usual crowds gathering for the annual family turnout.

This is thought to be only the third time in her reign she will not attend church with her family on Christmas Day – and the first time the Windsors have not attended en masse in that time.

The Queen is facing another heartbreak this festive season by not being able to see her great-grandson Archie.

As Prince Harry and Meghan Markle are currently living in Los Angeles with their son Archie and will not be returning to the UK for the Christmas period.

Other members of the Royal Family are also facing spending Christmas away from their families.

Princess Eugenie and Princess Beatrice also face spending Christmas apart and away from their parents, Prince Andrew and Sarah Ferguson.

This is because the entire York family is trapped in Tier 4 areas.