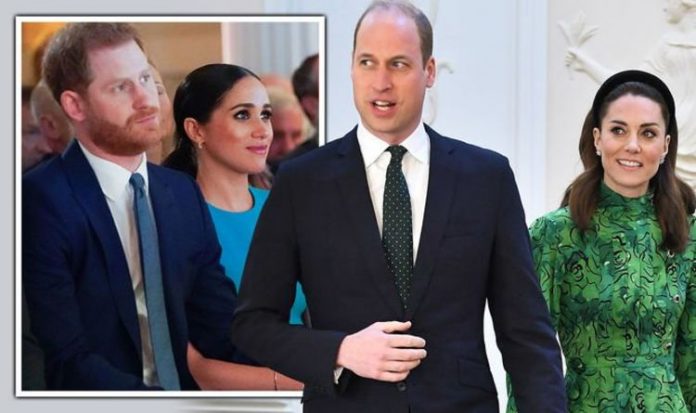 When discussing Meghan and Harry’s decision to step down as senior royals, Mr Smith hinted to this website he believed a clash between the couples could have played a part.

He said: “I think there’s a lot that went on behind the scenes that we’re not being told.

“So was there jealousy?

“I think so, certainly jealousy between the two couples.

“Harry and Meghan have mega-watt charisma and William and Kate don’t.”

The celebrity biographer went on to heavily praise the Duchess of Sussex, and claim she has one thing other royal’s don’t.

He told this website Meghan is relatable “to so many people” and highlighted the Duchess’ key attribute, which was clearly seen in one of her final royal engagements before stepping down.

He said: “That visit she did to that school in Dagenham on her farewell tour said everything you needed to know about the approachability of Meghan Markle that the others just do not have.

JUST IN: Meghan Markle struggled with being ‘lauded only for womb and wardrobe’

The celebrity biographer added: “They missed out on Meghan, I think there is no question of that.

“Little girls would say that she looks like me and it’s so nice to see that somebody can achieve something who looks like me.”

Mr Smith further highlights how the Duchess could have been an asset to the Royal Family in his new book, Meghan Misunderstood.

He wrote: “One of the saddest postscripts to Meghan’s exit from the UK is that she could have been someone for all of this country to accept and someone within the Royal Family to whom we could feel a connection.

“In the modern world, standing up for the empowerment of women and articulating that concern, achieving self-made success and wealth, and actually looking like a million and more girls and women around the country should have led to a warm embrace, not the death of a dream by a thousand cuts.