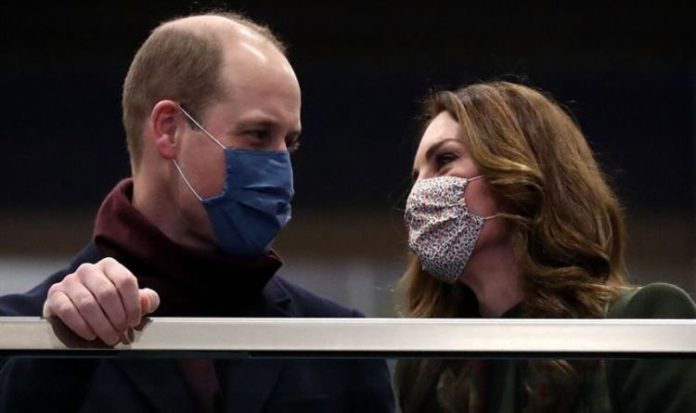 Kate and William set off on their whirlwind 1,250-mile tour of the UK on Sunday evening and were greeted by a special live performance at London Euston Station. The royal couple were serenaded by a band fronted by Welsh singer Shakin’ Stevens who performed a rendition of his festive classic Merry Christmas Everyone.

The 72-year-old recording artist – whose real name is Michael Barratt – revealed he was delighted to find out Kate and William had handpicked the 80s festive tune to be played.

Kate, 38, and William, 38, could be seen smiling and watching on from a balcony in the London station before boarding the Queen’s train.

Speaking to the London Evening Standard, Mr Barratt said: “I’m loving it, it was lovely to be invited.

“And it was them who chose the song. Over the moon.”

He insisted the royal couple were “certainly fans” of his festive hit, adding: “They picked it.”

Kate and William took part in a royal tour of the UK in order to pay tribute to the extraordinary work of key workers and communities during the COVID-19 crisis.

On Monday, they visited Scotland and toured Berwick-upon-Tweed, Batley and Manchester as they met schoolchildren, ambulance workers, volunteers and charity workers.

Today, Kate and William kicked off the tour in Wales, which included a talk with university students to discuss the challenges of mental health felt by young people during the past nine months.

Kate also got into the festive spirit with a socially distanced Secret Santa gift swap with six student housemates who had a bubble together.

The Duke of Cambridge also gave an insight into their own Christmas plans and revealed they were having trouble deciding what to do.

William said: “It is so difficult, we are still trying to make plans. It’s difficult to know what to do for the best.”

The tour had been criticised by Welsh and Scottish ministers amid coronavirus restrictions but was given the backing of Number 10 who said it provided a “welcome morale boost to frontline workers”.

Windsor Castle was the final stop of the tour and they were joined by leading members of the Royal Family including the Queen, 94.

The trio joined Prince of Wales, Duchess of Cornwall, The Earl and Countess of Wessex and The Princess Royal at an outdoor event in the grounds of the royal residents to thank local volunteers and organisations.

Much like the beginning of the tour, it ended with a musical theme as the royals were treated to Christmas carols performed by The Salvation Army Band.