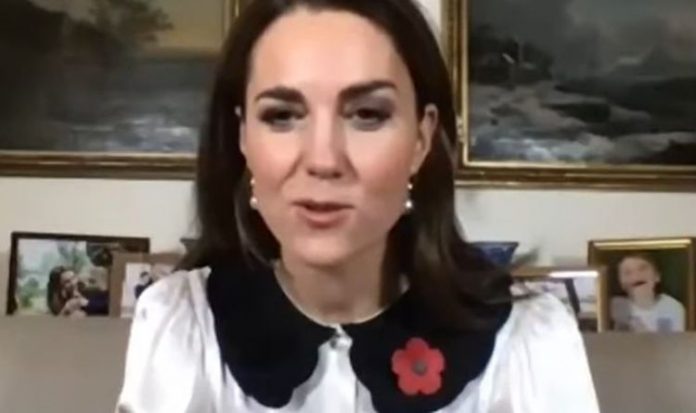 Kate, Duchess of Cambridge, may have been trying to give a “subtle nod” to Princess Diana through her fashion choices, according to royal commentators. The Duchess had been chatting with armed forces families on a Zoom call as part of Remembrance week. Royally Obsessed podcast hosts Roberta Fiorito and Rachel Bowie discussed the royal’s “vintage-inspired” style.

Ms Fiorito told listeners: “She wore a white silk blouse with a black scallop collar and a red Remembrance poppy pinned to it.

“It was very distinct, it really stood out to me because it’s so different from the softer colours and florals she’s worn.

“Whenever she wears an embellished collar like that, sort of a Peter Pan style, it’s a subtle nod to Diana.

“After she gave birth to Louis, she also wore a Peter Pan collar.”

Ms Bowie agreed: “I think a lot of the times when she does that it is a nice nod to Diana.

“It felt very vintage-inspired, which was really sweet.

“It’s also sold out already, out of stock online at least.

“It’s by Ghost, is in major department stores and is about £75, so it’s a pretty affordable top.”

Kate has similarly experimented with the look before, each time drawing comparisons with Diana.

The red dress she wore following Prince Louis’ birth echoed the same colour the princess wore after the birth of Prince Harry in 1984.

Additionally, Kate’s hospital polka dot dress after Prince George’s birth was very similar to the one worn by Diaan after William was born in 1982.

At this latest engagement, the Duchess paired her statement blouse with black trousers and simple pearl earrings.

She spoke to several families who had lost loved ones serving in the military from her home at Kensington Palace.