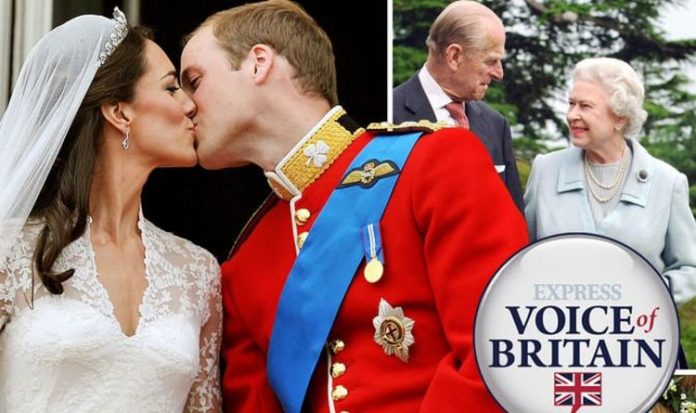 The Duke and Duchess of Cambridge triumphed with 1,174 votes (60 percent) of the vote after 1,940 readers shared which royal wedding was their favourite between 11.41am and 8.32pm today. Prince Charles and Diana’s doomed marriage in 1981 won second place with 366 votes (20 percent). Prince Harry and Meghan Markle however, only received 63 votes (three percent).

Prince Andrew and Sarah Ferguson’s wedding in 1986 was only given 26 votes (one percent) and came joint last with Prince Edward and Sophie, Countess of Wessex.

Readers also shared their views on the most memorable royal weddings over the years.

One said: “Hard to choose, wavered between HRM and Prince Philip, who married years before I was born, and Prince William and Catherine’s, whose I chose in the end.”

Kate and William have been voted the royal’s best wedding (Image: GETTY)

The Queen and Prince Philip pictured on their wedding day in 1947 (Image: GETTY)

Another added they believed Kate and William’s wedding could stand the test of time.

They said: “Prince William and Kate Middleton, followed by Edward and Sophie Wessex.

“These are the two Royal marriages that have (and hopefully will) stand the test of time.”

A third reader was also full of praise for Kate and William as they said: “Definitely the wedding of Prince William and Catherine Duchess of Cambridge is my favourite.

Kate and William received the most votes in the royal wedding poll (Image: APESTER)

“It was a beautiful wedding for two mature adults ready to take up their duties no matter what.

“They are such a loyal and respectable couple.”

To mark the Queen and Prince Philip’s anniversary, Buckingham Palace released a photograph of the pair looking at a card made by their great-grandchildren Prince George, Princess Charlotte and Prince Louis, alongside other cards and letters from well-wishers.

The picture was taken at Windsor Castle, which the queen’s home west of London where the couple are staying during the lockdown.

The palace said on Twitter: “Thank you to everyone for your kind wishes on the Queen and the Duke of Edinburgh’s 73rd Wedding Anniversary.

Their grandson Prince William married his long term love Kate, the Duchess of Cambridge, in 2011.

Their pair married in a beautiful wedding at Westminster Abbey on April 29 of that year following a long romance lasting since their university days.

The Royal Family have had some spectacular weddings over the years (Image: EXPRESS)

Their wedding was watched by 27.7 million people in the UK alone.

Their wedding was also the first royal wedding of a divorced person to take place within the Church of England as Meghan was previously married to producer Trevor Engelson.

But he first married Diana Spencer at St Paul’s Cathedral in London on July 29 1981.

Their wedding was watched by 75 million people on television.

But their marriage ended in divorce in 1996, with Diana tragically dying in a car crash a year later.

Their wedding was a low-key affair and did not involve the military as it was not classed as a state event.

However, Prince Andrew’s wedding to Sarah Ferguson was well-documented in 1986.

They had known each other since childhood and married at Westminster Abbey on July 23 of that year.

Princess Anne and Mark Phillips married on the bride’s 25th birthday on November 14, 1973 at Westminster Abbey.

The couple celebrated at Buckingham Palace before setting sail on their honeymoon on the Royal Britannia yacht.