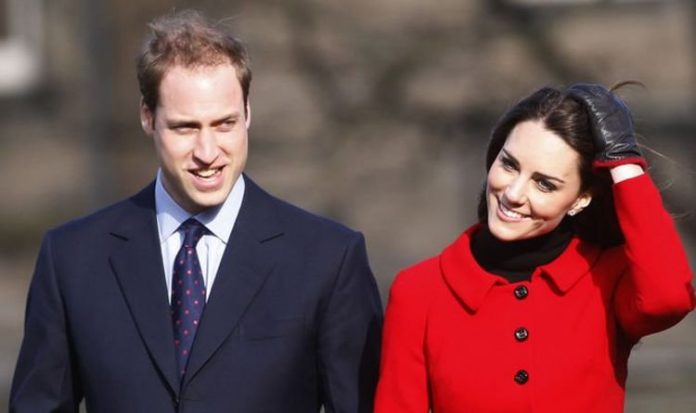 The couple met in 2001 whilst both were students at St Andrew’s University in Scotland.

Appearing on Channel 5 documentary ‘William & Kate: Too Good to Be True?’ royal author Tom Quinn gave an account of how the couple were first introduced.

He said: “One of the funny stories is he was so desperate to meet her that as he walked towards her, he apparently tripped and said, ‘Oh that’s a terrible start, you’re going to think I’m a complete clot’.”

William and Kate began dating in 2003 with the relationship becoming public the following year when they were pictured together on a skiing trip.

The couple briefly split in 2007 before reconnecting.

William proposed during a holiday in Kenya and the engagement was announced to the public in November 2010.

The following April the couple were married at London’s Westminster Abbey in front of a global TV audience of hundreds of million.

They completed a tour of North America later that year before Kate announced her first pregnancy on December 3, 2012.

READ MORE: Prince Harry in heartfelt plea for charity ‘so close’ to his heart

William and Kate are currently living at Anmer Hall, their Norfolk home.

The couple moved here from London with their three children shortly before the most recent coronavirus lockdown was announced.

Throughout the pandemic, the Cambridges’ have continued royal engagements, using video calls when Government restrictions prevented in person meetings.

According to the Daily Mirror, Kate is planning a new project to help young people who have suffered with mental health problems during the repeated shutdowns.

READ MORE: Meghan and Harry fail to improve image in US after complaints

Speaking to the paper, a palace insider said: “These themes are so often grounded in a difficult childhood and have undoubtedly been exacerbated for thousands of vulnerable children during the pandemic.

“The Duchess’s primary work will be to build on the results of the survey and bring together more partners to focus on those who are most at risk of falling through the cracks of society.

“In her own words, she believes the early years should be on par with the other great social challenges and opportunities of our time.

“The early years can play such a crucial role in shaping our future which is why this is so important, not just in the immediate aftermath of the pandemic, but also to have a chance of achieving real change for generations.”