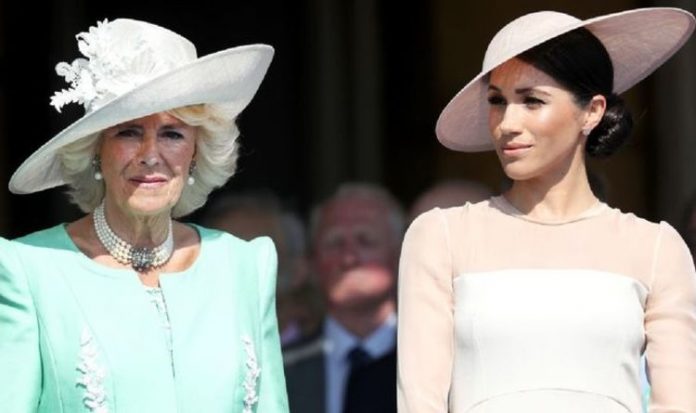 The Duchess of Sussex has often complained about the intense public scrutiny that came with her royal status and struggled to cope with it. Before she married Prince Harry, Camilla invited Meghan to a private lunch in an attempt to help her to adjust to Royal life, the Mail on Sunday said. At the head-to-head the Duchess of Cornwall tried to prepare Meghan for the challenges she would face at the hands of the media, telling her to “ride out the storm”.

It is understood that Camilla urged her companion to focus on the positives of her new role and to ignore negative press headlines.

A friend of Meghan’s told the newspaper that the Duchess of Sussex listened to Camilla and “understood” the difficulties she would face adapting to Royal life.

She said that the Duchess of Cornwall “was very sensitive to Meghan and provided her with support, advising her to ride out the storm and that it would all pass – but ultimately Meghan didn’t listen.”

Camilla’s advice came from her own bitter experience of having to deal with negative media headlines, following the breakup of the marriage between Charles and Diana.

Meghan and Prince Harry last year decided to quit the Royal family and move to the US to pursue a new life.

They have resettled in Santa Barbara, where they live together with their son, Archie.

READ MORE: Prince Harry in heartfelt plea for charity ‘so close’ to his heart

In addition they also signed a deal with Spotify to produce podcasts.

They also continue to promote charitable work through their Archewell Foundation.