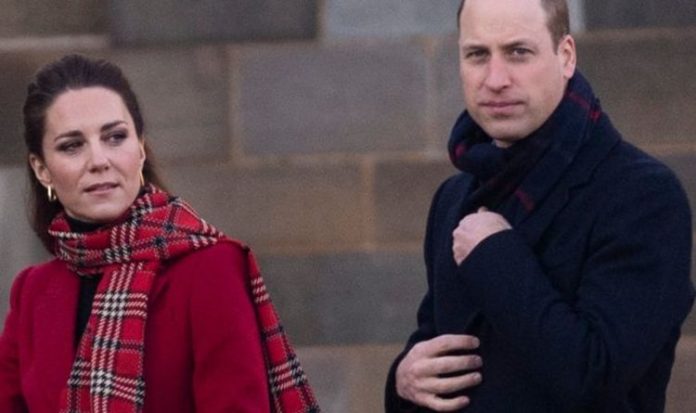 Nicola Sturgeon has been blasted for “not welcoming” Prince William and Kate, Duchess of Cambridge, when their national train tour arrived in Scotland. The First Minister said that Kensington Palace had been made aware of restrictions on crossing the border from England, but still went ahead with the trip. Mary from Lanarkshire in the central Lowlands of Scotland called into Channel 5’s Jeremy Vine show to express her fury at the SNP leader.

She said: “I think it was great for Kate and William to come along.

“I think Nicola Sturgeon was disgusting and despicable.

“She didn’t say ‘don’t come’, but she didn’t welcome them as everybody’s saying.

“The other thing as well is had they gone to the other places and not Scotland, she would have had something to say about that too.”

READ MORE: Kate and William’s children to ‘take over’ royal roles unlike Wessexes

The Duke and Duchess of Cambridge are touring around the UK to thank key workers for their efforts during the coronavirus pandemic.

However their venture has been met with a lukewarm response, particularly from the devolved nations.

The royal couple stopped in Cardiff to meet with university students and talk about mental health challenges.

Mr Gething told Sky News: “A visit from the Duke and Duchess of Cambridge isn’t really my concern.

“I have a huge amount of responsibility that I really do need to attend to.

“I’m not particularly interested either way. I’m most interested in how we persuade people to do the right thing to keep Wales safe.

“I’m not here to be a commentator on royal visits, there are plenty of other people to do that. I’m the health minister for Wales in the middle of an unfinished pandemic.”