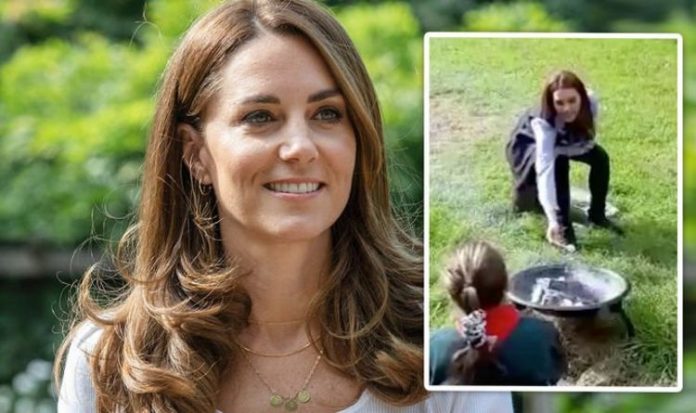 Kate stepped out in west London this morning to join young members of the 12th Northolt Scout Group. The Duchess looked at ease as she toasted marshmallow and played games with Cub and Beaver Scouts.

Opening up on the impact this youth movement has had in her own life, Kate said: “For many children and young people, The Scout Association plays a key role as they build relationships and develop the skills they need to succeed in later life.

“When I volunteered with the Scouts on Anglesey eight years ago, I was struck by the huge impact the organisation has on inspiring young people to support their communities and achieve their goals.

Today’s engagement in London marked the Duchess’ appointment as joint president of the Scout Association.

She joins another royal in this role – the Duke of Kent.

Delighted to have been given the chance to lead this organisation, the Duchess said: “I am delighted to be joining the Duke of Kent as joint president of the Association and look forward to working with Scouts across the country as they strive to make a positive difference to our society.”

Wearing jeans, a gilet, and a Scout scarf the Duchess of Cambridge joked with children around a bonfire.

Mindful of social distancing measures in place, the Duchess also spoke to staff, parents and volunteers at the association.

The association, Kate heard, adapted to the challenges posed by the pandemic by launching the Great Indoors campaign, which featured online sessions to keep scouts united despite the stay at home order.

Resonating with Kate’s appeal made to pupils during lockdown to be kind to other people, Scout groups across the UK have also contributed over 10,000 acts of kindness by sending cards and greetings to care home residents.

The new co-president of the Scouts was also presented with the Silver Wolf Award, the highest award given by the association.

The Duke of Kent, who is one of the Queen’s first cousins, also holds this award.

The royal welcomed Kate’s new role saying: “As The Scout Association’s President since 1975, it has been my privilege to watch as they evolve with the times, while honouring their proud history.

“The Scouts’ ethos of dedication, inclusivity, and lending a helping hand wherever one is needed resonates across the generations, and as such I am delighted to welcome the Duchess of Cambridge as Joint President, and to work together to continue that legacy.”

Kate has publicly showed her appreciation for the work carried out by the Scout Associations on more than one occasion.

In 2016, she visited the Cubs in North Wootton, near King’s Lynn in Norfolk, to celebrate 100 years of the youth movement.

The Duchess has been a vocal advocate of the positive effects the outdoors have on people’s mental and physical wellbeing.

And she makes sure to “drag outside” her three children every day, no matter the weather.

“It encourages creativity, confidence and even a short amount of time – 10 or 15 minutes – makes a huge difference to ­physical wellbeing but also to our mental wellbeing.”