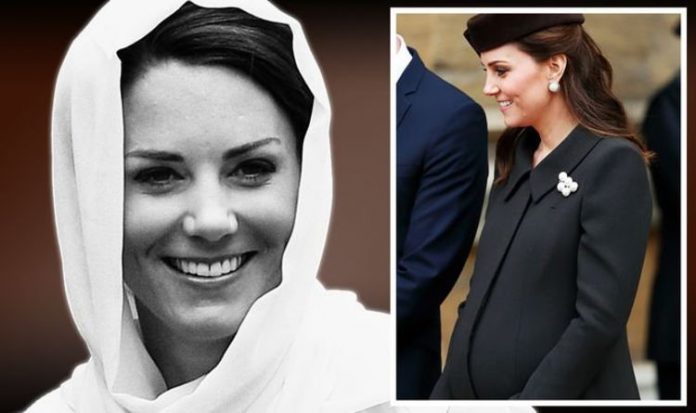 In recent months, royal fans’ excitement has gone into overdrive with the news that Princess Eugenie and husband Jack Brooksbank will be having their first child together in early 2021. This has led to attention being turned to Kate and husband Prince William, with many admirers hoping the couple will have a fourth baby to join their Cambridge family. Many are now assessing Kate and looking out for hints that the Duchess of Cambridge may be pregnant, and throwback reports expose one way that she suggested she was indeed with child.

The sign was given weeks before it was formally confirmed by Buckingham Palace that Kate was expecting her first son Prince George.

Yet, before this announcement, Kate fuelled speculation by being pictured drinking a glass of water, as opposed to wine, during a state banquet in Singapore.

Daily Beast royal columnist Tom Sykes claimed the move was “highly unusual” for a member of the Windsor family to “toast with anything but a glass of wine”.

At the time in September 2012, the Washington Times wrote there was “also a suggestion that the Duchess showed maybe a hint of a baby bump in the dress she wore to the banquet”.

In an opinion piece, the newspaper added: “If the media is acting a bit overexcited and absurd about all this, it’s only out of love.

“Everyone would be thrilled if William and Kate became parents because it would allow us to coo over the Duchess’s maternity dresses and then coo even more when images of the royal swaddled babe are eventually released.

“Look, Beyonce and Jay-Z already had their kid, and the child currently getting the most attention in these United States is Honey Boo Boo.

“America needs this, even if William and Kate are, technically, British.”

JUST IN: Balmoral Castle: The first royal ever to be born at Scottish estate

Panic engulfed insiders at Buckingham Palace, as many were concerned that Kate’s appearance in hospital could lead to speculation surrounding whether she was pregnant.

So, despite only being around 12 weeks pregnant, St James’ Palace made the announcement to the public confirming her pregnancy, with other members of the Royal Family only finding out just hours before.

A week before Kate’s pregnancy was confirmed, William sparked reports that she was expecting after he accepted a baby romper suit from a member of the public in Cambridge.

The outfit had the words “Daddy’s little co-pilot” emblazoned on it, as well as a picture of a helicopter.