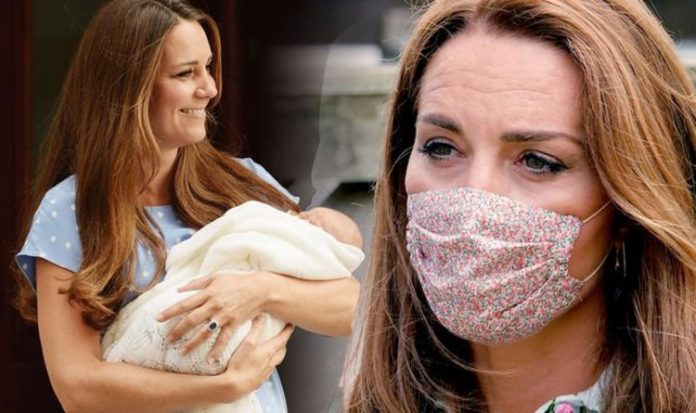 London’s King Edward VII Hospital was forced to review its telephone practices following the “deplorable” acts of Australian radio DJs Mel Greig and Michael Christian. The pair put on what was described at the time as “exaggerated accents” to fool hospital staff into giving an update on the poorly Duchess of Cambridge, who had been hospitalised as a result of suffering with hyperemesis gravidarum. In recent months, speculation surrounding whether Kate will join fellow royal Princess Eugenie in announcing she is expecting what would be a fourth child has grown.

Should a new baby be welcomed to the world, they would join siblings Prince George, Princess Charlotte and Prince Louis in the Cambridge fold.

But in one bombshell moment, the Australian DJs were able to gather valuable insight into Kate’s condition as she struggled to control the severe morning sickness.

ABC reported that as well as the fake accents, the pair also “enlisted two co-workers to bark like the Queen’s corgis”.

During the encounter, one of the broadcasters said to a hospital nurse: “I’m just after my granddaughter, Kate. I want to see how her little tummy bug is going.”

The nurse responded in 2012: “She’s sleeping at the moment, and she has had an uneventful night and sleep is good for her.

“She’s been getting some fluids to rehydrate her because she was quite dehydrated when she came in, but she’s stable at the moment.”

The nurse then added: “She’s quite stable at the moment. She hasn’t had any retching… since I’ve been on duty.

“And she has been sleeping on and off. I think it’s difficult sleeping in a strange bed as well.”

Reports that Kate and William could announce baby plans have gathered further momentum in the past week, after bookmaker Coral made it odds on, at 4-5, that the couple will confirm they are expecting at some point in 2020.

The firm’s Harry Aitkenhead said: “There’ve been plenty of times during 2020 that we’ve thought a baby announcement was on the way from Kate and Wills and we do still make it odds on that it comes before the year is out.”

Kate further excited royal fans after discussing how much she adores being a parent while on podcast ‘Happy Baby, Happy Mum’ earlier this year.

She told the broadcast that she believed all mothers suffer from “mum guilt”, and that “anyone who doesn’t as a mother is lying”.