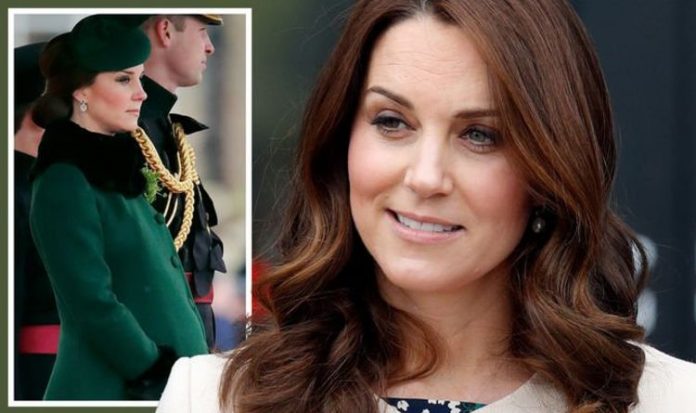 More and more in recent weeks, speculation has gathered momentum over who will be the next mother to give birth to a royal baby, with many claiming the likes of Kate, Princess Eugenie or Princess Beatrice may make a bombshell announcement. But Kate’s first pregnancy left many concerned for her health, including royal expert Victoria Arbiter who explained she would have the “best care possible”. The Duchess of Cambridge endured acute bouts of morning sickness, leading her to need hydration and nutrients, when preparing herself to welcome her first son, and future heir to the throne.

Called hyperemesis gravidarum, the condition can cause excessive nausea and vomiting, and often results in patients being forced into hospital for treatments.

This was the case when Kate was expecting with George, and it paved the way for her to give birth in a hospital, following in the footsteps of her mother-in-law Princess Diana.

Buckingham Palace confirmed Kate’s hospital visit, which led many to speculate that she would give birth to George in the Lindo wing of St Mary’s Hospital, London – the same hospital her husband Prince William was born in.

In 2012, Ms Arbiter revealed that Kate would “definitely give birth in a hospital, certainly if she is still enduring complications such as this”.

She added: “They’ll be keen for Kate to get the best care possible because ultimately she is carrying the heir to the throne.”

She made an appearance on the Happy Mum, Happy Baby podcast, in which she discussed parenthood and the difficulties mothers and fathers often face.

After Louis arrived, Kate moved back to her normal look, which celebrity stylist James Johnson said would allow the Duchess of Cambridge to “keep her hair off her face” as she supported her young family.

Speaking to FEMAIL in 2018, Mr Johnson said: “She was known for her big and bouncy ‘Chelsea blow dry’ for years and now she’s gone back to that, back to her signature style.

“It might be easier for her to have longer hair so that she can pull it back and off her face while running after three young children.”