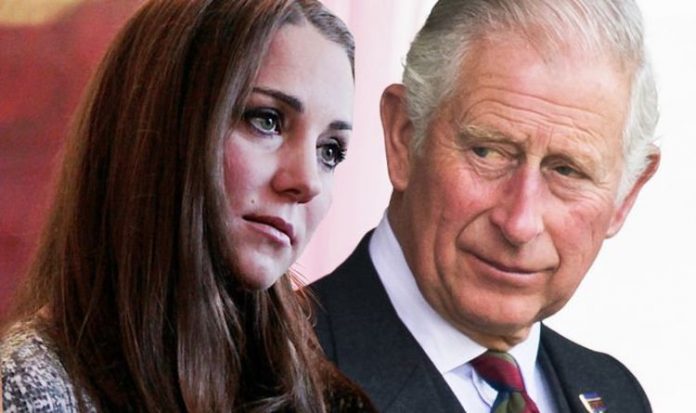 Speculation has continued to grow regarding whether Kate, and her husband Prince William, will announce they are expecting a fourth child, to join Prince George, Princess Charlotte and Prince Louis in the Cambridge fold. Reports gained even further momentum after Princess Eugenie confirmed that she and husband Jack Brooksbank will be welcoming a child to the world in the early part of next year. But in a heartbreaking moment, Prince Charles delivered his verdict on becoming a grandfather for the first time, despite the ongoing panic surrounding Kate’s health while pregnant.

It is well documented that Kate was suffering with hyperemesis gravidarum, an acute form of morning sickness, which is incredibly rare in women, while expecting George.

As a result of the condition, Kate was treated for several days in London’s King Edward VII Hospital, where William would routinely visit her to check on the Duchess’ health.

But upon the announcement, just hours before she went into hospital, that Kate was pregnant, Charles expressed his delight and relief over the news.

At the time she was expecting Prince George, Charles said: “I’m thrilled, marvellous.

“It’s a very nice thought of grandfatherhood in my old age, if I may say so, so that’s splendid.”

He added: “I’m very glad my daughter-in-law is getting better, thank goodness.”

According to ABC, Kate’s condition worsened while she and William were staying with the Duchess’ parents in Bucklebury, where she started experiencing severe morning sickness symptoms.

This led William to spring “into action and drove his wife along with their personal security team 50 miles in their Range Rover to the hospital where Kate was placed on an IV drip”.

An ABC report in 2012 added that the “Royal Family was only notified of Kate’s pregnancy mere hours before the rest of the world”.