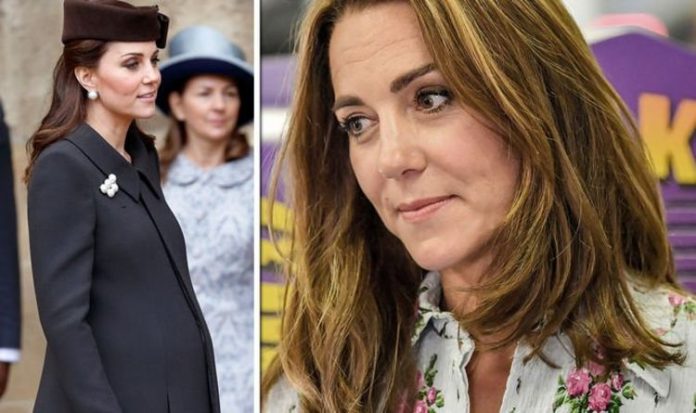 Royal fans across the globe are eagerly awaiting news of who the next Windsor mother will be, with speculation mounting that it could be Kate, Duchess of Cambridge, Princess Eugenie or Princess Beatrice. Despite enduring a difficult year, including the Royal Family exit of popular members Prince Harry and Meghan Markle, the Firm has maintained its importance during the coronavirus pandemic. But as experts begin to discuss who will be the newest parents in the Royal Family, throwback reports show how Kate was forced to use a tactic to help her combat “complications” before her birth.

Kate suffered with a bout of hyperemesis gravidarum, an acute morning sickness which requires supplementary hydration and nutrients.

It got so bad that she was hospitalised.

Before George’s birth, she was admitted to the King Edward VII Hospital, London, in order to be treated for the condition.

And although faced with such difficult circumstances, Kate explained that she took several hypnobirthing classes in a bid to calm her during labour, and to combat the morning sickness.

Speaking this year on the ‘Happy Mum, Happy Baby’ podcast, Kate said: “It was through hyperemesis that I really realised the power of the mind over the body because I really had to try everything and everything to try and help me through it.”

She added: “I’m not going to say that William was standing there sort of, chanting sweet nothings at me. He definitely wasn’t!

“I didn’t even ask him about it, but it was just something I wanted to do for myself.

“I saw the power of it really, the meditation and the deep breathing and things like that – that they teach you in hypnobirthing – when I was really sick and actually I realised that this was something I could take control of, I suppose, during labour.

JUST IN: Prince William could change his name when he becomes king

The Duchess of Cambridge’s appearance on the podcast sparked widespread excitement, especially her discussion surrounding her experience of being a parent herself.

She told the podcast that she believed all mothers suffer from “mum guilt”, and that “anyone who doesn’t as a mother is lying”.