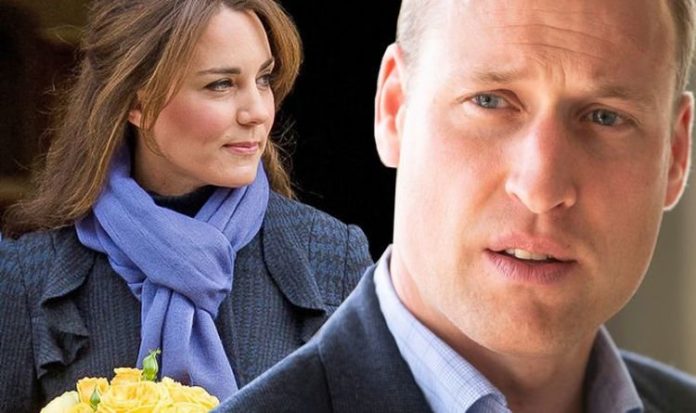 Despite enduring a difficult year, which has seen Prince Harry and Meghan Markle resign from senior Royal Family duties and Prince Andrew spark controversy over his friendship with paedophile Jeffrey Epstein, the Firm remains in the public spotlight. Regardless of their troubles, many observers maintain excitement over who the next addition to the Royal Family will be, with fans hoping a senior royals such as the Duchess of Cambridge, Princess Eugenie or Princess Beatrice will announce they are expecting. But as experts make claims surrounding whether Kate may be ready to welcome her fourth child to the world, it has emerged that William was “concerned” for his wife when she fell ill during her “high risk pregnancy”.

In 2012, the Duchess of Cambridge was forced to move away from the royal tradition of giving birth in Buckingham Palace as a result of suffering with a bout of hyperemesis gravidarum, an acute morning sickness which requires supplementary hydration and nutrients.

Before George’s birth, she was admitted to the King Edward VII Hospital, London, in order to be treated for the condition.

As speculation grew that Kate would give birth in a hospital, ABC News royal expert Victoria Arbiter revealed that William would be excited to welcome his son in the same hospital he was born.

She said: “They’ll want to be in a hospital for the best facilities, the best level of care in case any complications arise [since] Kate could be considered a high-risk pregnancy.”

Ms Arbiter predicted that Kate’s husband Prince William would want George to arrive in the Lindo wing of St Mary’s Hospital, London, like he was when his mother Princess Diana gave birth to him.

She said that although William hoped this would happen, “his main concern is going to be for Kate and the health of the baby”.

But when discussing where Kate would realistically give birth, Ms Arbiter added: “Kate will definitely give birth in a hospital, certainly if she is still enduring complications such as this.

“They’ll be keen for Kate to get the best care possible because ultimately she is carrying the heir to the throne.”

JUST IN: Queen shock: How Queen was forced to keep pregnancies under wraps

Other ways the likes of Kate have exposed they are expecting, include refusing alcoholic drinks while attending visits to other countries, including the trip to Ireland, where a traditional pint of Guinness is enjoyed.

It comes as the Duchess of Cambridge sparked widespread excitement after she appeared on the Happy Mum, Happy Baby podcast to discuss parenthood.

She revealed that all mothers suffer from “mum guilt”, and that “anyone who doesn’t as a mother is lying”.