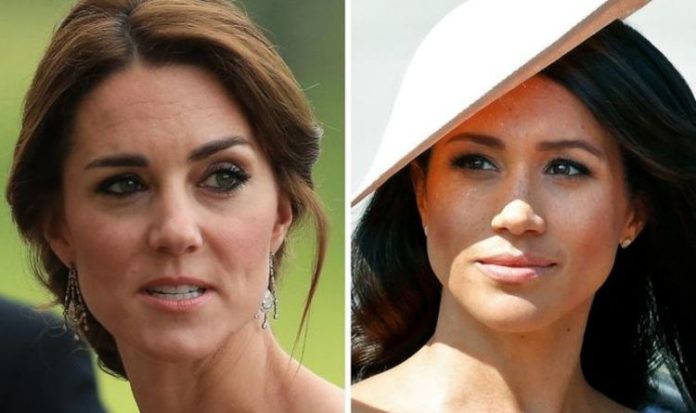 Since Meghan and her husband Prince Harry decided to uproot and move to the US, quitting their roles within the Royal Family, a reported row between the Duchess of Sussex and the Duchess of Cambridge has dominated discussion. Claims of a feud between Harry and his brother Prince William has also been speculated, particularly after the Duke of Sussex told the world he and his sibling were on “different paths” in an admission two years ago. Harry has not seen members of the Royal Family since the departure last year, and a meeting to discuss his progress with Megxit – the term coined to describe Meghan and Harry’s exit – has been postponed.

The fallout between the Sussexes and the rest of the Firm is a world away from what those at Buckingham Palace had originally hoped for, with insiders keen for the couples to become the face of the monarchy moving forward.

Ashley Pearson, a royal reporter, told Amazon Prime’s 2020 documentary Harry & Meghan: The Next Step, that part of the tension was due to Kate and Meghan being unable to strike up a solid friendship.

She said: “Initially Harry and Meghan moved in together, on Kensington Palace grounds. They had a rather small cottage, I think it was just two bedrooms.

“It wasn’t grand or especially big, but it was very close to William and Kate. I think the hopes were that Kate would help Meghan adjust, and the two women would become fierce and loyal friends, and would be joined at the hip, and everything would go smoothly.”

But Ms Pearson said that ultimately this “is not what happened,” and the pair “have really not forged the kind of friendship royal insiders were hoping they would”.

She added: “They are by all means cordial, but I don’t believe they are close friends. I think Meghan and Kate probably don’t have all that much in common and they’re both fully formed adult women.

“They’re not teenagers you take on a trip together.”

JUST IN: Kate’s ‘unexpected’ new look in recent appearance – ‘Is that Kate?’

One of the Meghan’s friends also told the Daily Mail that “it’s obvious that Kate and William do not approve of their choice” and that “you could cut the tension with a knife”, after they made their last royal appearance in March last year.

More recently, it emerged that sources said Meghan and Harry were happy with their current arrangement away from the Royal Family.

As a result of their decision, the couple are now free to lead financially independent lives, which has resulted in them signing lucrative deals with Spotify and Netflix.

But royal correspondent Angela Levin said when the arrangements for Harry to meet the family over Megxit were rearranged, Meghan wouldn’t come back.

She added: “She obviously hated it within the Royal Family and was preparing to leave even before the wedding.

“I think she wouldn’t want to come back. She didn’t like the UK [as] it was too small for her.”

Meghan’s friends have also told the Daily Mail that her trip to complete her final engagements last year only reassured her she had made the right choice.

An insider claimed: “She said [the trip] has been a confirmation that they made the right choice in parting ways.

“There’s no warmth between the family members and she wants to raise Archie in a household that is filled with laughter and joy and lots of hugs.

“It’s still weird to her that no one hugs and that everyone is so uptight, especially Kate.”