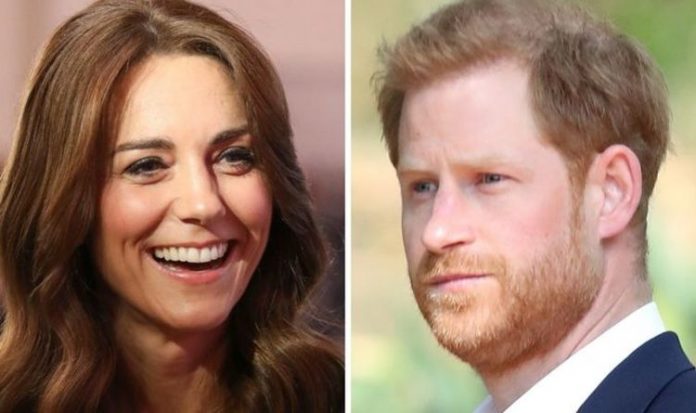 Kate and husband Prince William have enjoyed a royal renaissance during the coronavirus pandemic, upping their presence and filling the gap left by Harry and his wife Meghan Markle. Recent YouGov polling demonstrated the Cambridges’ enduring appeal, with William the second most popular Royal Family member, just ahead of Kate in third. Before his departure from senior royal duties last year, Harry was one of the most liked members of the Firm, alongside Meghan.

Yet since, this relationship has diminished with the British public.

Critics argue that while Harry and Meghan have sought to gain financial independence through lucrative deals with brands like Spotify and Netflix, Kate and William helped boost the nation’s morale during a dark 2020.

Ingrid Seward, editor-in-chief of Majesty magazine, however said she expected the public to turn away from Kate and demand a return for Harry, as the “public just can’t get enough of him”.

As a “party creature”, Harry would often find himself on the front pages of newspapers, particularly during his younger years, Ms Seward explained.

But Ms Seward said that all the public “want to see is Harry being Harry”, as for a time he was one of the most relatable royals in the Windsor family.

Speaking on Amazon Prime’s Harry & Meghan: The Next Step in 2020, the author said that as Kate grows into motherhood, and William goes higher up the royal ranks, there will come a time when Harry will be needed back in the set-up.

She added: “The more family and children that William and Kate have, and the more ‘mumsy’ she gets, the more people are going to want naughty Harry.

“I don’t see any respite from him, I think people are going to want more of Harry.

JUST IN: Kate Middleton’s fears of being ‘eclipsed’ by ambitious sister Pippa

The source said: “Despite everything that has been going on this year, they don’t regret their move to the US.

“They love that they are able to focus on projects and causes that are important to them.”

However, as a result of their departure Harry was forced to lose his military titles, “the one truly disappointing result of the move away” from the royals.

Before his relationship with Meghan, Kate and Harry shared a close friendship, but as his bond with brother William deteriorated so did his with the Duchess of Cambridge.

It was also claimed that after William and Kate’s spectacular wedding in 2011, Harry lost his long-time girlfriend Chelsy Davy, as she struggled to cope with the limelight afforded her.

Seeing Kate walk down the aisle convinced Chelsy this wasn’t a life she wanted to enter, so the couple soon broke up.

Royal author Robert Lacey, who wrote the 2020 book Battle of Brothers: William, Harry and the Inside Story of a Family in Tumult, said: “In 2011, after more comings and goings, she finally decided to go — and it was, ironically, Kate and William’s grand and glorious wedding that spring that did it for her.

“According to a friend, she told Harry that she could never make the sacrifices she had witnessed Kate making, particularly when it came to moulding her life around the unremitting attention of the press.”

Battle of Brothers: William, Harry and the Inside Story of a Family in Tumult was released last year, published by HarperCollins and available here.