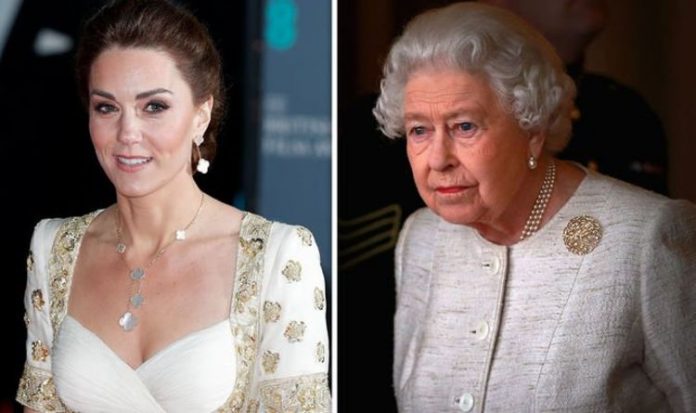 Kate’s full royal title is HRH (Her Royal Highness) the Duchess of Cambridge but through her marriage to William, she is also a Princess of the United Kingdom.

While Kate continues to be known as the Duchess of Cambridge she could have requested a different style from the Queen had she wanted a different title, a constitutional expert has claimed.

Expert Iain MacMarthanne explained the fluid nature of the styles royal wives inherit through their husbands and claimed they are at liberty to still be known by their maiden names if they so wish.

Explaining their right to request a new style from the Queen, Mr MacMarthanne said: “The duchess holds her styles and titles as a courtesy, derived from her husband.”

Mr MacMarthanne added: “It would be unusual for it to be given to Prince Louis in time.

“The passing of a title to a younger son, as is being contemplated with the dukedom of Edinburgh is to keep that title alive, which otherwise would itself eventually become merged with the crown with Charles becoming king.

Kate will be known as William’s consort when he is king and while she will share his rank and status she will not hold the same political and constitutional powers as her husband.

“Their consorts might have aided and supported their spouses role but their primary duty was to produce legitimate heirs.

“Unless required sovereign power was never shared between a ruler and their consort. In short it was a mater of expediency and ensuring a satisfactory command structure.

“Despite monarchy moving from being absolute to constitutional this sensibility has never changed.

“There can be only one sovereign, holding and dispensing sovereign power, unless at the will of Parliament.”