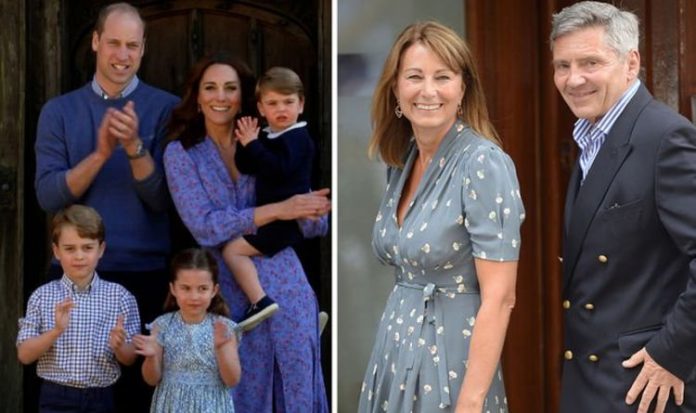 Prince William and Kate, Duchess of Cambridge may be members of the Royal Family, but the couple are not exempt from the Christmas lockdown restrictions in place in England. The UK Government announced last month lockdown rules will be temporarily relaxed for five days over the Christmas period. During this time, people can meet with up to three households to form a Christmas bubble for the holidays.

Over the last few years, the Cambridge’s have chosen to spend Christmas Day in the company of the Queen and Prince Philip at Sandringham in Norfolk.

In previous years the family have also spent Christmas with Kate’s parents, Michael and Carole Middleton, in their home of Bucklebury, West Berkshire.

This year Christmas will look a bit different for everyone, including the royals, and it seems Kate and William have not made a decision about where they will be spending Christmas this year.

Kate and William have recently been on a royal tour of the UK, and while meeting students in Cardiff Prince William suggested the family are still confused over where to spend the holidays.

Speaking about his Christmas plans, William said: “It is so difficult. We are still trying to make plans. It’s difficult to know what to do for the best.”

Lily Faulkner, a politics and international studies student at Cardiff University, said after meeting the royal pair: “They were trying like the rest of us to make Christmas plans with their family and still weren’t 100 percent sure of what they were going to do or where they were going to be.”

It has not yet been confirmed whether the Cambridge’s will be spending Christmas with William or Kate’s family this year, and there has been significant speculation over who the Queen and Prince Philip will spend Christmas with as well.

Buckingham Palace has now confirmed the Queen and Philip will be spending Christmas together this year at Windsor Castle, where the couple have spent most of 2020 isolating.

A Buckingham Palace spokesperson said: “Having considered all the appropriate advice, the Queen and the Duke of Edinburgh have decided that this year they will spend Christmas quietly in Windsor.”

This year will mark the first time the couple have spent Christmas at Windsor since the 1980s, with royal Christmas’ traditionally held at the private Sandringham estate in Norfolk.

The Queen and Philip are usually joined by members of the Royal Family over the festive period, and members are seen every year attending the Christmas Day service at their nearby church of St Mary Magdalene.

However this year the Queen and Philip are likely to spend most of the festive period as a duo, although some family members could drop in in-line with the Government guidance.

It has been reported the Queen and Philip will be visited by their youngest son Prince Edward and his wife Sophie, Countess of Wessex, along with their two children Louise and James.

The Wessexes live a short drive away from Windsor, and a source told the Daily Mail: “Prince Edward and his family will be one of the two in her bubble.”

It has not been confirmed whether the Queen and Philip will see the Cambridge family over the bubble period as well.

Several members of the Royal Family could meet on Boxing Day for the traditional royal shoot, it has been reported.

Shoots are classed as outdoor sports, meaning up to 30 family members could technically attend.

A source told the Daily Mail: “The royal family’s traditional Boxing Day shoot could still take place, enabling them to see members of the family unable to join them on Christmas Eve and Christmas Day.”

However it is not known if the Royal Family may avoid the tradition this year due to the ongoing lockdown, as the move may not win the approval of the public if it went ahead.