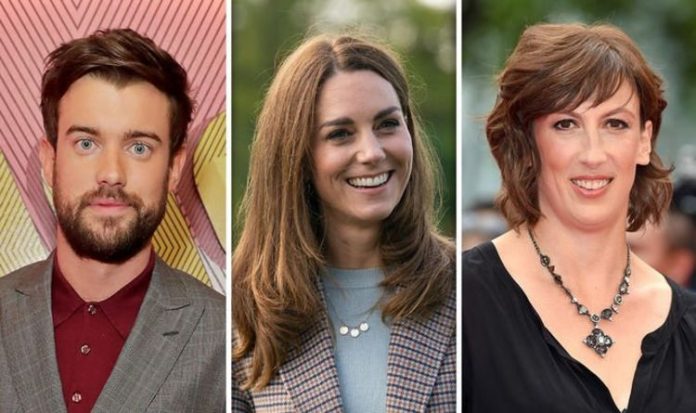 The Duchess of Cambridge went to the same school as both Jack and Miranda at some point ‒ although not at the same time as them. Miranda, 47, attended Downe House School for Girls, Royal Country Berkshire, where Kate, 39, attended for a couple of terms. Discussing this connection on his chat show in 2015, Graham Norton asked: “Was it as posh as it sounds?”

Miranda said: “It was quite posh, yes, it’s quite high achieving.

“You go to a school reunion now and I think it’s quite good that I can say I’m a comedian on the telly, but that’s frowned upon.

“You’ve got people going, ‘My children, Mozzarella and Bruschetta, are lovely now, they’re quite a brood, work is a bit of a break, even though I’m the head of the UN.’

Kate Middleton has a surprising link to both Miranda Hart and Jack Whitehall (Image: GETTY)

Graham Norton announced that there were (Image: BBC)

Jack then piped up that his first ever girlfriend went to Downe House, leading Miranda to exclaim: “Shut up!”

He explained how they were together for only about three weeks and she was “very well to do”.

He added cheekily: “But it turned out, as soon as we got down to a bit of nookie, she was filthy, so I’m a big fan of Down House.

“I went to second base in a stable.”

The actor added: “I wasn’t allowed near Down House after a while.”

Mr Morton joked that you “sort of know how the school got its name now”.

Jack, 32, then explained that he attended Marlborough College, where Kate went to after she left Downe House.

He, too, was not there at the same time as the Duchess, this time because he was too young.

Kate went to the same school as Miranda for a couple of terms (Image: GETTY)

However, he did know people who dated the future Queen at school.

Jack said: “I wasn’t there at the same time, but I knew people who went out with her.

Adele, who was also on the couch during this episode of The Graham Norton Show, asked whether these were all private schools.

Jack said: “Yeah, I mean that’s the most ludicrous thing about this Kate Middleton thing about her being the first commoner marrying into the Royal Family and they write about her like she’s from the ghetto.

“Marlborough College made Midsomer Murders look like The Wire.

“We had one black guy in the entire school, who was my friend called Daniel who the headmaster used to use in every single school photograph to make our school look more diverse.

Jack Whitehall went to the same school at the Duchess of Cambridge (Image: BBC)

Miranda joked that at her school, they were “bred for queens”, before adding that Mr Norton, who is openly gay, “should have been there”.

The host said: “I Know! I’m just muddling along!”