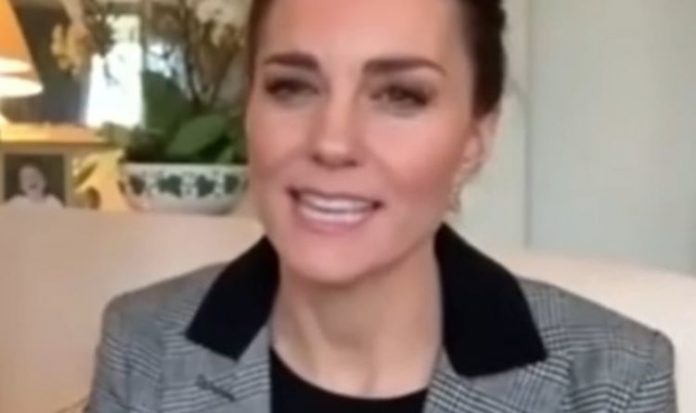 Kate, Duchess of Cambridge, has been praised for her latest fashion choice feeling “on-point for the occasion”. The royal and her husband, Prince William, had been speaking with frontline workers and counsellors from the a bereavement support service. Royally Obsessed podcast hosts Roberta Fiorito and Rachel Bowie noted the Duchess’ more “professional” look.

“She re-wore a Smythe blazer, that we’ve seen her in two previous times.

“Her hair was pulled back, it was very professional, serious, getting down to business.

“This obviously holds so much weight.”

She continued: “I think anything colourful in this situation would feel weird.

“So her fashion definitely felt on-point for this occasion.”

Kate’s Smythe blazer was a grey check/plaid version from the Canadian brand.

The last time she was seen in it was 2019 during a celebration event for Shout UK.

Again this is an item that Kate has numerous colours of.

The Duchess bore the ensemble as she and William spoke virtually to NHS staff and emergency responders about their personal experiences with mental health.

Those involved were from Yorkshire-based charity, Just ‘B’ Bereavement Support.

William even opened up about his own experiences seeing “death and so much bereavement” while working as an air ambulance pilot.