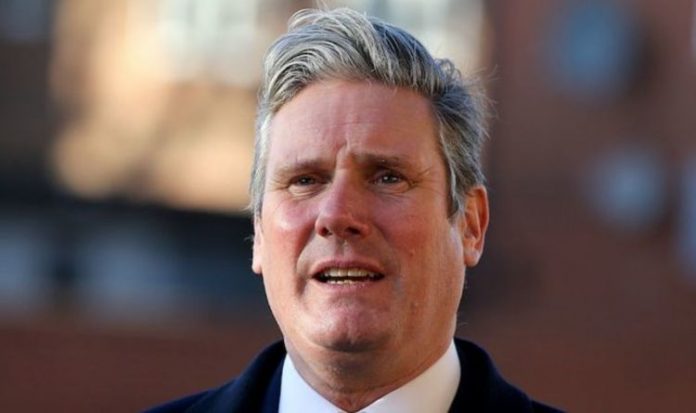 Sir Keir has committed Labour to delivering a new and vast wave of devolution across the UK. It comes as the Labour leader looks to attract support from Scottish National Party (SNP) voters and scupper First Minister Nicola Sturgeon’s plans for independence. Announcing a “constitutional commission”, Sir Keir said Labour was ready to help “rebuild” Britain as a united kingdom in a post-coronavirus and post-Brexit world.

He faces staunch opposition from Ms Sturgeon, however, who has consistently argued that independence is “essential” for rebuilding Scotland post-Covid-19.

She has often used the guise of a Conservative Government in Westminster to claim that the interests of Scots are being ignored.

And while Sir Keir faces a challenge in Ms Sturgeon, he also faces difficulties in winning over those whom he plans to divert power to.

Paul Embery, a leading trade unionist and Labour member, told Express.co.uk, that the party had already tried considerable devolution during former leader Tony Blair’s leadership, in the early Noughties, which only led to yet more bureaucratic tiers of Government with no “real affinity”.

Keir Starmer: The Labour leader announced his plans to devolution in a speech yesterday (Image: GETTY)

Mr Embery notes the failed 2004 North East devolution referendum, in which those living in the region voted against 78 percent to 22 percent.

He said: “I don’t think people really like the idea of regional governments.

“The Labour Party tried it back in the early Noughties with the North East and it wasn’t taken up by people.

“I think people see these regional prospective governments as artificial constructs, and people just think it’s another tier of Government that doesn’t have any real affinity.

JUST IN: ‘Nobody cares!’ Starmer’s devolution plans trashed as UK in crisis

“If you go to the North East people might feel Geordie or they might feel that they’re from a particular place or county like Durham, but they don’t feel like a North Easterner, that doesn’t really have much meaning.

“If you go to Devon and Cornwall, people might feel like they’re from Devon or Cornwall and have an affinity to those counties, but they don’t feel like South Westerners.

“So I don’t think this regional stuff cuts through.”

While it is true that Sir Keir’s devolution message was mostly aimed at Scotland, the Labour leader will also be hoping those in the North of England take note; those communities in the so-called “Red Wall”, working class, Labour safe seats that fell to the Tories in 2019.

Yet Mr Embery said even this could potentially further damage Labour’s already festering wound, making Labour appear as if it wants to leave regions to their own devices.

He explained: “I believe in an English Parliament, there’s a real sense of national dispossession in England – a sense that people shouldn’t be proud to be English.

“Politicians try to put any sense of Englishness into the background and I think you saw that sense of English disposition come through in Brexit, you saw it with many of these seats across the North and the Midlands voting for the Tories out of anger as much as anything.

“I believe in an English Parliament – I think that’s one Democratic way to resolve that.”

On hearing the plans, Ms Sturgeon said Sir Keir wanted nothing more than to “constitutionally tinker”, rubbishing Scottish Labour’s chances of offering a new challenge to the SNP’s dominance of politics in Scotland.

But Sir Keir argued that the coronavirus crisis has put “rocket boosters” under the case for decentralisation, the pandemic having proved that significant parts of not only Scotland, but England, Wales and Northern Ireland needed to be handed more powers.

Steven Fielding, Professor of Political History at the University of Nottingham who specialises in the politics of the Labour Party, said that this is something which “cuts deep”.

He told Express.co.uk: “Of course, it’s in Starmer’s best interests to try to win back Scotland and prove Labour is serious about power there, but these devolution proposals are also a kind of middle-way for all of the nations.

Sturgeon: The First Minister became leader of the SNP in 2014 (Image: Express Newspapers)

“He is saying, ‘We’ve seen what centralisation does in a crisis, look what Boris Johnson has done, we need more devolution in England so we can deal with problems more specifically’.

“There’s an argument that if local councils had got more powers, and that if the central Government had trusted them with more power, then COVID wouldn’t be as bad in some places as it currently is.

“Starmer’s argument is that if we don’t say we’re going to devolve power, as a kind of way to keep the Scots in the union, they’re going to leave.

Sir Keir’s speech was peppered with the nationalistic and patriotic overtones, something he has adopted and hammered home since becoming opposition leader in April.

He argued that the UK shared “history, values and identity”, and held a united narrative that mustn’t be broken up by internal borders.

He said: “I don’t believe in putting up borders across any part of our United Kingdom, in dividing people, communities and families who have stood together for so long.

“I believe in that core Labour principle that we achieve more together than we do alone.

“All four nations, working together to build a more open, more optimistic and outward-looking country.

“A United Kingdom that’s a force for social justice and a moral force for good in the world.”