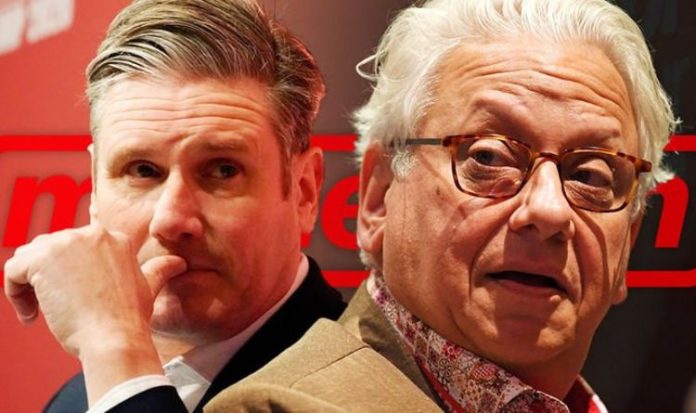 Sir Keir, the man who became the leader of the Labour in April, is moving the party towards the centre-ground. It comes after the opposition group suffered its worst election defeat since 1935 almost a year ago under former leader Jeremy Corbyn. Mr Corbyn transformed the party into a left-wing socialist outfit, with many of his close allies remaining as senior members of the party.

One member who has faced recent backlash is Deputy Leader Angela Rayner, who called Tory MP Chris Clarkson “scum” in Parliament – an event which Sir Keir is now being pressured to take action against.

Grassroots groups like Momentum who enjoyed considerable influence under Mr Corbyn, now fear Sir Keir is going too far in his plans for the party.

This summer, the group’s Camden branch went as far as to demand a vote of no confidence in the new leader.

Keir Starmer: The Labour leader will push ahead with reforms despite left-wing opposition (Image: GETTY)

Despite this, Steven Fielding, Professor of Political History at the University of Nottingham who specialises in the politics of the Labour Party, told Express.co.uk that Sir Keir will push ahead “irrespective” of Labour’s left-wing factions.

He said: “So long as Starmer looks like he knows what he’s doing and the public is responding well to what he’s doing, he can push the party in the direction he wants to, irrespective of what Momentum, Len McCluskey (Unite the Union leader) or any left-wing successor as a trade union leader will say.

“He’s always going to be opposed by the likes of McCluskey and Momentum, but given the support, he’ll continue down the same path.”

Mr McCluskey has made public his opposition to Sir Keir in recent weeks.

Momentum: Owen Jones has worked closely with the group with many members unsatisfied with Starmer (Image: GETTY)

Earlier this month, he retracted 10 percent of Unite’s funding to the party.

It came in response to Sir Keir’s substantial payout to former Labour employees turned whistleblowers who gave interviews to a Panorama documentary probing antisemitism in the party.

Jeremy Corbyn: The former Labour leader led the party to its worst defeat since 1935 (Image: GETTY)

Jon Lansman: The political activist founded Momentum but has since stepped down as chairman (Image: GETTY)

On the issue, Mr McCluskey said: “It would be a mistake if anybody took Unite for granted.”

He has, however, expressed support for the Labour leader.

Meanwhile, Momentum appears to be diminishing in both influence and size.

At its peak, the group claimed to have 40,000 members around the UK.

However, when they held elections after Sir Keir was elected leader, only around 8,000 people participated.

Prof Fielding went as far as to say Momentum are a “busted flush”, describing the group as having “faded away” into “insignificance”.

The party has its National Executive Committee (NEC) election results in the next few weeks.

Sir Keir’s future and how he manoeuvres the party going forward is widely regarded as resting on the NEC results.

The Labour leader has also faced criticism from left-wing groups for holding Prime Minister Boris Johnson to account over his handling of the coronavirus pandemic.

For the first time in months, Sir Keir did condemn the Government’s stance on the pandemic, calling out Mr Johnson over his handling of the Greater Manchester Tier 3 debacle.

The rebuke came during Prime Minister’s Questions, where Sir Keir accused the Prime Minister of offering Manchester and other regions “grubby take it or leave it deals” and “miserly” financial help.

Mr Johnson hit back by saying Sir Keir wanted to “turn the lights out” by plunging the UK into another national lockdown.

He insisted his regionalised approach to restrictions was working.